There has been a lot of gossip and more serious discussion within the healthcare devices industry about patents, their use in marketing strategy, their hindering product development, and their true value as intellectual property (IP). 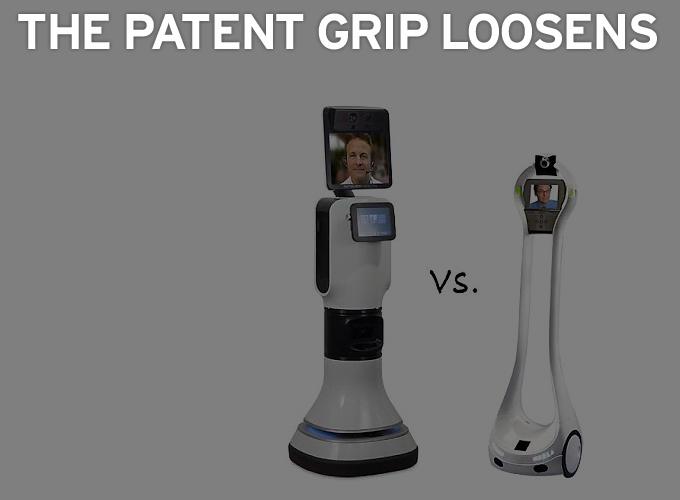 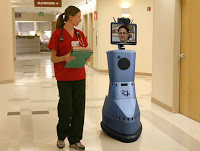 InTouch Health, a company that has been providing remote presence services to the medical community for the past decade contacted VGo and suggested that they agree to a licensing agreement of InTouch patents. A suit followed and, in a Los Angeles Federal District courtroom yesterday, a jury found that VGo Communications did not infringe.

VGo requested that the US Patent Office re-examine four patents held by InTouch. VGo provided supporting documents on why those patents were invalid. To date, the US Patent Office has ruled on three of the re-examination requests and has rejected all of the claims within those patents previously granted to InTouch. The fourth patent is still in the re-examination process. This is just the beginning of what appears to be an ongoing round of claims and counter claims and appeals leading off to a decision - instead of by a jury - by patent experts at the Appeals Court.

In rhetoric typical of the best political spin doctor, Peter Vicars, CEO of VGo Communication said, "InTouch Health has been taking advantage of an overworked patent system in order to secure invalid patents that they then use to bleed competitors with frivolous lawsuits. New companies are producing competitive products at prices significantly less than what InTouch charges so InTouch is using teams of lawyers to maintain their exorbitant prices."

Rhetoric aside, VGo's low-cost two-way audio video communications combined with remote controlled mobility enables nurses, doctors and social workers to check on patients without having to be physically present. They feel better cared for and appreciate the extra effort. Recovery times are quicker and re-admissions are reduced. More time for the healthcare worker and lower costs for the healthcare organization.

The entry into the healthcare marketplace by VGo - a marketplace nurtured and developed by InTouch over the past decade - appears to be the root cause of the suit. InTouch trail-blazed the products, the FDA clearances, the marketplace and they want to protect their turf.

At a recent conference on remote presence telemedicine the most enlightening thing I saw was four hours of tightly-packed presentations by critical care doctors and hospital administrators, all users of InTouch Health's remote presence robots, all portraying different aspects of why remote presence in health care is relevant, is saving lives and is necessary today and why it will continue to be in the future. InTouch has created a market that didn't exist with products that weren't being used in the way they are now. Certainly on a personal note one would think that there is room for more companies to assist in this very noble work.

But this is where patents kick in to protect that investment in market and product development which InTouch did. In fact, patents protect the holder for 17 years. Thus the courts decision is a bigger subject than just InTouch vs. VGo.

There has been a lot of gossip and more serious discussion within the healthcare devices industry about patents, their use in marketing strategy, their hindering product development, and their true value as intellectual property (IP).

Within the robotics healthcare community, much of that gossip has been focused on Intuitive Surgical and their da Vinci Surgical System. From the beginning, when Intuitive spun out from Stanford and SRI, they immediately had a legal battle with Computer Motion, the inventor of a similar system called Zeus. Since that time Intuitive has regularly contacted competitors to either get them to cease operations or license their patents. Many felt that this thwarted development of competing or better systems than the da Vinci. They have suggested that Intuitive Surgical has made a strategy of amassing large numbers of patents - some of which are so broad as to be susceptible to being thrown out on reexamination - to try to protect their product and market share.

This is the essence of the arguments that people have used against Intuitive Surgical for the past 10 years. Except that no company has asked the Patent Office to reexamine their patents… yet.

In their suit with Computer Motion a decade ago, Intuitive won. But shortly thereafter, Computer Motion won their counter-suit. Stalemate. The two companies met outside of court and agreed to merge, shut down the Zeus operation, pay off the owners of Computer Motion with a small cash amount and 30% of Intuitive Surgical stock - a company that today has a net worth of close to $21 billion. Thus the consequences of these patent battles are significant.

Yulan Wang, the founder of Computer Motion, moved on after the acquisition [of Computer Motion by Intuitive Surgical] to found InTouch Health, the very same company that just lost the first round of their battle with VGo.

New systems have proliferated in remote presence and robotic-assisted non-invasive surgeries but, in the case of surgical systems, none have yet to make it to market. RAVEN and SPRINT are two such systems presently in the news with reviews indicating that they are viable competitors to the da Vinci system.

“SPRINT” is an EU-developed master-slave teleoperated robotic platform designed for bimanual interventions by means of a single access port. The system is composed by two main arms, a stereoscopic-camera, and additional devices, e.g. retractor or other assistive instruments that can be inserted through a central tube left free in the access port after the introduction. The surgeon console is composed of two master manipulators, a foot-switch and a 3D full-HD display. 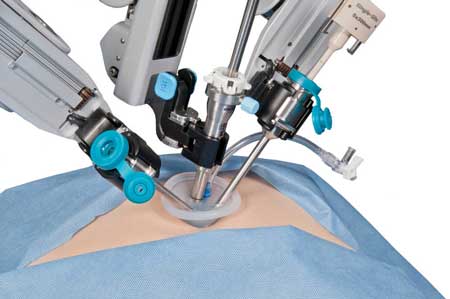 Single-port surgical system by Intuitive Surgical.
Intuitive Surgical has recently announced their single-port surgical system, a competing concept to the SPRINT system. One can see another patent battle coming.
In the early years of automobile development, a group owned the rights to a two-cycle gasoline engine patent. By controlling this patent, they were able to monopolize the industry and force car manufacturers to adhere to their demands or risk a lawsuit. In 1911, independent automaker Henry Ford won a challenge to the patent. The result was that the patent became virtually worthless and a new association - which would eventually become the Motor Vehicle Manufacturers Association - was formed. The new association instituted a cross-licensing agreement among all U.S. auto manufacturers: although each company would develop technology and file patents, those patents were shared openly and without the exchange of money between all the manufacturers. By the time the U.S. entered WWII, 92 Ford patents and 515 patents from other companies were being shared between these manufacturers, without any exchange of money - or lawsuits. The best braking system was shared by all as was the best window wiper, and many, many other inventions passed freely from one car company to the others. The result was the the user benefitted with the safest and best cars, no matter the brands - and the auto industry flourished as well.
If something like this were to happen in the medical robotics arena, these wonderful new inventions would be available all over the world and patients, care-givers and healthcare systems would all share in the benefits and lives saved.
Perhaps there will be a time in the near future when new products like RAVEN and SPRINT will have a similar success as did VGo - maybe even without the costs and resources diverted from product development to fighting court cases.
Nevertheless, InTouch Health today filed an appeal of the verdict and also the patent reexaminations.
Reprinted with permission from Everything Robotic.com