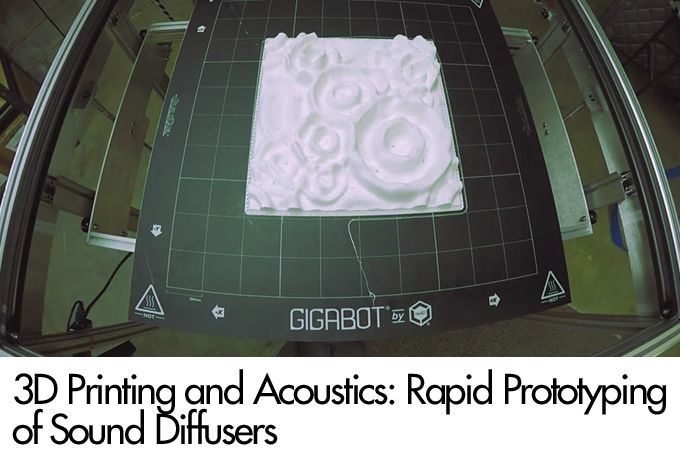 As the summer winds down, Acoustics First has been using 3D modeling and printing to ramp up the development of their new design ideas.

In June 2015, Acoustics First acquired a Gigabot™ large format 3D printer. This particular 3D printer is produced by Re:3D, a burgeoning company whose principals come from varied backgrounds, including work at NASA.  Gigabot™ 3D printers have been used in a wide range of applications, from artwork and architecture to prosthetics and board games.

Re:3D offers either a fully assembled Gigabot™ or a DIY Parts Kit for the technically inclined. We opted for the parts kit, and built the unit in a few weeks. Though it was a painstaking process, in the end, we were happy we did it. Since we have hands-on knowledge of how all the parts work together, we’ve had a relatively easy time troubleshooting any problems.

For those who aren’t familiar with 3D printers, imagine a hot glue gun on an x,y,z axis. The plastic filament is fed through the “hot end” at a certain rate by a motor that controls the extruder wheel. The printer works layer by layer, polar coordinate to polar coordinate, moving in the x and y axes before lowering the bed (z axis).  The bed is heated to keep the plastic warm and prevent warping.

You might be wondering what an acoustics company could possibly need a 3D printer for?  Besides being a really neat toy to have around the office, Gigabot’s™ eight cubic foot build volume makes it ideal for the rapid development and prototyping of Acoustics First’s industry leading sound diffusers.

What are sound diffusers?

Figure 2 - Flat Panel Response @ 5kHz: Most of the sound is being reflected directly at the source.

Diffusion, in simple terms, is the scattering of sound energy. When sound bounces off hard flat surfaces, the energy remains very much intact yielding discrete echoes. These echoes produce destructive effects like comb filtering, standing waves and flutter echoes which degrade speech intelligibility and musical clarity. A space that is considered “perfectly diffused” is one in which sonic energy is evenly distributed and “sounds” the same as someone walks around the room. A sound environment with no or inadequate diffusion would have significantly different reverberation times (at each frequency) at different locations within the space.

We begin the prototyping process by designing a diffuser in 3D modeling software. We then run computer simulations to predict how effective the new design is.  Rapid prototyping with the 3D printer allows us to quickly and efficiently take that computer model and produce a physical product that we can then run real-world tests on. The two polar diagrams (Figures 2 and 3) are taken from these acoustic tests (test results courtesy of NWAA Labs).

Sound diffusers, like our Art Diffusor® series, often incorporate complex geometries and precise mathematics that make the typical prototyping and manufacturing processes tedious and costly. Previously, if there were complex geometries in a diffuser design, a prototype would have to be built using a 5 axis CNC milling machine through a third party, before the molds were even made. We wouldn’t be able to run acoustic tests on the unit until after we had a “finished product”. Before 3D modeling and printing, we’d have to go through the entire process on theory alone; any necessary changes would force us to start the costly process over again.

By being able to design diffusers in 3D and print them, we streamline the prototyping process tremendously. We can do virtual simulations with the 3D models to get a sense of the effectiveness, and we can make aesthetic or functional changes before it’s printed. Now we can go through many versions before committing funds and other resources to a final prototype. Before the 3D printer, making a mold could cost as much as tens of thousands of dollars. Now we can print a full scale model for a fraction of the cost.

Beside the economic benefits, there are practical reasons for having the diffuser prototype physically in hand.  We can learn a substantial amount more about structural and other design issues from the tangible unit, than we ever could by simply looking at the 3D model. If a picture is worth a thousand words, having a physical prototype is worth countless more.

We look forward to using this wonderful device on many projects in the years to come. For more information and videos showing the Gigabot™ in action, visit http://acousticsfirst.info/2015/08/31/rapid-prototyping-designing-the-future-now/ or check out Re3D’s site http://www.re3d.org/

About Cameron Girard
Cameron Girard is a member of Acoustics First’s technical team. He uses his experience as an acoustic consultant to help clients improve classrooms, auditoriums, churches and many other critical listening spaces.