Driverless and Zero Emsision are REALITY by 2020. 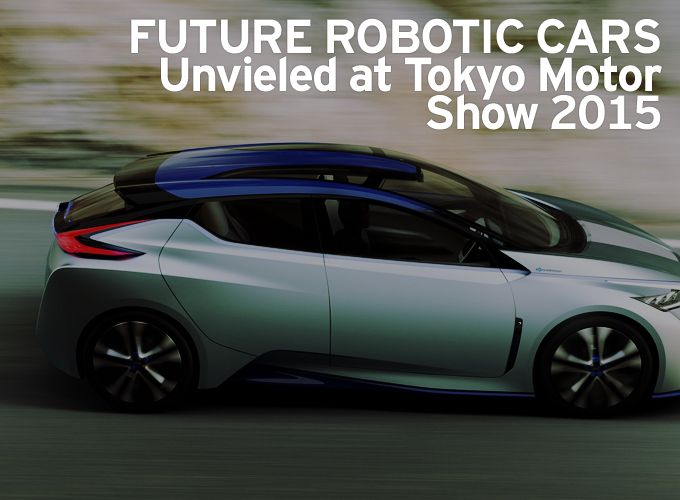 The Biennial Tokyo Motor Show makes car enthusiasts always to watch out for next genration cars. In addition to Japanese Home made cars; World Car Makers exhibit their series of the most desirable vehicles that may or may not fill our roads in the near future. This year the show also had advanced robotic concept cars that were highly attractive and technologically appealing to many vistors. Recently, at the Tokyo Motor Show 2015, among the innumerable cars, the newest of the newest: Driverless cars and ZERO emissios concepts were exhibited to the fullest imagination.

Driving without driving appears to be theme every car makers had in mind for 2015;  Sounds like something we would see James Bond movies all around ? Japan's domestic car manufacturers have made significant efforts with 40 plus new debuts along with finest Artifical Intellgience programs installed.in every concept.

NISSAN IDS concept: a car that can drive itself to places by full automatic operation. Not only does it have Piloted Drive (PD) mode, but has an installation of Manual Drive (MD) mode for those who are fans of driving on their own. Nothing complicated, just a switch of a button to PD mode, the steering wheel, axle, and brake are receded into the inside bringing a screen out visible for passengers. This model has been made to be friendly to others surrounding them including other cars and pedestrians. With a front window that equips an electric panel interiorly, enables the car to flash messages of "After you" . Interactive enough to allow other drivers to grasp the pave the way.

In addition, with LED lights equipped on the sides of the car body, it will enable for the car to give signals in the dark of its existence to the outside.Car Makers have made it clear that they are planning on this type of car to be hitting the roads and becoming familiarized by the public by 2020. One of the goals presented is to reach a world with zero traffic fatalities. Another is zero emissions. Having an installation of a new and improved electric battery, of course no CO2 emission and also longer driving distance with the same amount of battery charge. Many Messages were also directing that Forthcoming echnologies will revolutionize the relationship between car and driver, and future mobility." as NISSAN president and CEO, Carlos Ghosn, says, it might actually become our future.

Other companies are also finding their way to autopilot their driverless vehicles. Honda too has unveiled the Wander Stand Concept at the event. This vehicle is made very compact, fitting 2 adults. What makes it a one of a kind in the industry is how it can make lateral and diagonal movements unlike any other. While it most likely is to drive itself around, the dashboard will have a touchscreen and a rotating stick that replaces the role of a steering wheel. In other words, passengers will be able to use the rotating stick to move the vehicle around as desired. The car also has very unique characteristic is the body shape, the model is made very compact and is surprisingly made taller and shorter in length compared to what we are used to seeing today. The length being 2 meters, the width being 1.25 meters, and the height being 1.85 meters. Apparently this  is designed for the vehicle to accomplish nearly to ensure pedestrians are in the Wander Stand.

None the less every car that was exhibited in the ROBOTICs concepts had a tagline appearing by 2020 or in near furutre a reality to drive around with driverless cars.”This Car will hit the roads by 2020.”.

As the Tokyo Olympics are going to be held in 2020, perhaps autonomous vehicles will be a more familiar to us by then. Who knows how far technology can take us wiht out even human touch on the screen and steering wheel. A world with driverless cars may just be right around the corner.