Realizing that education must occur to build the bridge from Industry 4.0 to 5.0, Drive Manufacturing Summit is the first conference to embrace this line of thought. This unconventional conference will facilitate conversation around the cultural shift, not just informing attendees of advancements, but educating them on how to integrate them into their facilities for future proofing.

Something has changed in the last 10 years – while manufacturers have focused on continuous improvement within their space, the technology sector has also been making leaps and bounds in innovation, with new capabilities spanning cloud computing, big data, and mobile computing. These two independent, yet innovative industries, have now come to a pivotal moment: they are converging and the United States is uniquely positioned to take full advantage of these developments and redefine what it means to incorporate robotics on the factory floor.

For American manufacturers, robotics and automation is no stranger. They have studied and put into practice the Ford Production System and the Toyota Production System to continuously improve operations, with much of those improvements made by the use and integration of automation. As such, the sector has traditionally been one of the first industries to grab hold of burgeoning robotics technologies and incorporate them into process.

However, the convergence of advanced technology and manufacturing processes requires an organizational leader. Someone who will research, advise, and embrace on capability and process that were nothing more than imaginative a decade ago. This leader will drive robotics and automation solutions on the factory floor, and at the same time incorporate process, design and key strategies. This leader will emerge as the Chief Robotics Officer (CRO).

The CRO will lead Industry 5.0

The ‘CRO’ is a concept fueled from the progression of Industry 4.0. Also stemming from the ‘next industrial revolution’ as it is so often thought of are technologies spanning IoT, cloud computing, and big data - all of which play a critical role in the development of industry. Yet, something within the notion of CRO holds a certain level of integrity. Why? Because this role will not only lead the research and development initiatives for Industry 4.0 integration within the factory floor, it will leverage existing strategies to launch Industry 5.0.

In the last decade, Industry 4.0 capabilities have emerged through burgeoning technology, arguably attributed to accelerated changes in the market from ecommerce to requirements for mixed model production - the customer needs and wants are ever changing. The notion is characterized by Big Data and the Industrial Internet of Things to connect process through technologies and generate data. While these copious data are useful, even actionable if reported and leveraged properly, it is Industry 5.0 that ensures manufacturing leadership is focused and design methodologies to improve facility operations and manufacturing strategies across North America while addressing ways to overcome the key challenges facing industry today.

Realizing that education must occur to build the bridge from Industry 4.0 to 5.0, Drive Manufacturing Summit is the first conference to embrace this line of thought. This unconventional conference will facilitate conversation around the cultural shift, not just informing attendees of advancements, but educating them on how to integrate them into their facilities for future proofing. It will change the entire manufacturing sector and the imperative to move beyond Industry 4.0 to Industry 5.0.

While Germany lead the conversation of Industry 4.0 with its introduction in 2011 as the 4th industrial revolution, North America is uniquely positioned to lead the next, through industry 5.0. The Fourth Industrial Revolution, or Industry 4.0,  was first referenced by the German Federal Ministry of Education and research began to explore the various trends that were taking place. They wanted to identify things in high level technology that could help to improve the world and boost technology. This would allow those seeking future employment in the industrial sector to have a simplified work experience while allowing us to do more in a fraction of the time.  By 2012, the Germans had collected a great deal of research and they used this information to hold the first presentation on the subject. They took the smart factory setting and showcased some of the potential of Industry 4.0, allowing potential customers and industry professionals to gain a deeper understanding of what all was possible.

The operational impact of Industry 4.0 was the high-level concept that machines could think; reacting, and creating functional improvement to boost efficiencies and Overall Equipment Effectiveness (OEE). The German government was thrilled with the results and they began to boost funding to the research in the hopes it would advance their country and help them to become a frontrunner during the Industrial Revolution.

“Manufacturing competitiveness, increasingly propelled by advanced technologies, is converging the digital and physical worlds, within and beyond the factory to both customers and suppliers, creating a highly responsive, innovative, and competitive global manufacturing landscape,” said Craig Giffi, a leader in Deloitte US Consumer & Industrial Products Industry group and co-author of the report.

There is a unique personality to the North American manufacture: a no-nonsense “get the job done” philosophy.  Industry 4.0 brought about new technologies and capabilities, but failed to address 90% of manufacturers real-world, day-to-day challenges.  Step in, step up:  Industry 5.0.

North America, once the global leader in manufacturing acquiesced to Japan in the 1970s – 1990s; then China as a world manufacturing leader.

Why NA is positioned to lead the way

So, why will North America step forward now to lead the way? because we must. The Economist reported that the USA is close to full-employment with just a 4.3 percent unemployment rate. 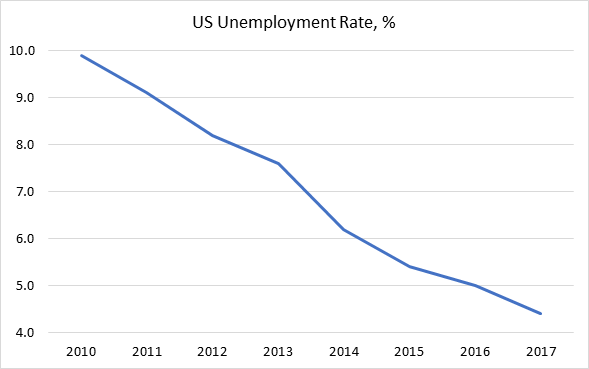 Source: US Bureau of Labor Statistics

But even with excellent employment rates, the manufacturing sector suffers from retention, disinterest from millennials and, most notably, a significant skills gap.

Manufacturers have reported a sizeable gap between the talent they need to keep growing their businesses and the talent they can actually find for nearly a decade; now it is a dire situation. Beyond today’s talent issues though, manufacturers need to address skills gaps for future years. The trajectory of the skills gap over the next decade according to Deloitte and The Manufacturing Institute embarked on their Skills Gap study, seeking to answer these pressing challenges The report reveals the issue is growing and is exacerbated by a number of factors that brings manufacturers to an inflection point that must be addressed in order to ensure viability and success of American-based operations as well as the nation’s economic prosperity as a whole. 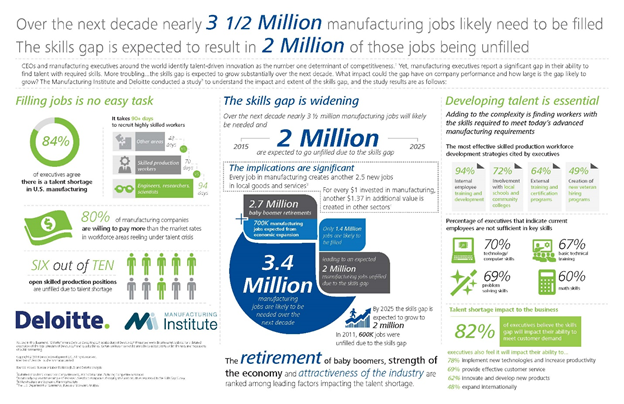 Robotic solutions are not a panacea.  Fears of displacing workers are deeply exaggerated; this skills gaps highlights the error in thinking among those who have long seen robotics and automation as job stealers. Industry 5.0 is a manufacturer's integration of automation as the needed skill workforce is absent requiring the role of automation as a very attractive and feasible option.

Machines do not replace human workers and create job losses to improve productivity. Rather, the lack of qualified human workers has driven the conversation to Industry 5.0, the implementation of robotic systems, which result in greater productivity. A 4.3 percent unemployment rate is something to celebrate yet more than five million North American manufacturing jobs that remain unfilled. And without the required skillsets, both robots and automation systems will remain in strong demand.

The significant skills gap is deeply exacerbated by those preparing to retire also threaten a manufacturer’s ability to attract and attain human workers. As baby boomers are leaving the workforce in massive numbers, 10,000 per day; an estimated 2.7 million jobs applicants will be needed due to these retirements.

Furthermore, wages are increasing drastically. This change is enough in itself to fuel the rise of Industry 5.0. 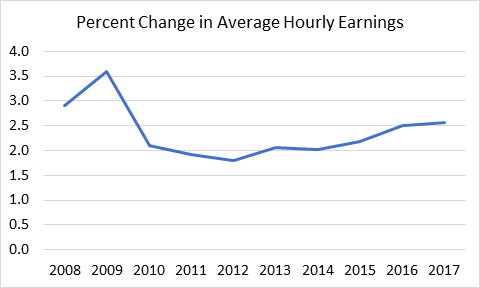 Source: US Bureau of Labor Statistics

Until now, even at full employment, hourly wage earnings have been slowly creeping up.  That is about to change. In 2017, over 20 states are slated to increase minimum wage with California leading the way. They plan to increase minimum wage annually until 2022, bringing the minimum wage rate to $15.00 per hour.  Wage increases leave manufacturers in a dilemma: increase wages for all employees and be forced to either raise prices on manufactured goods or products, or cut into profits.

The combination of increasing hourly wages, a skills shortage, and the threat of a retiring workforce are at the intersection of automation and manufacturing excellence.  It is the intersection known from this day forward as Industry 5.0, which will be carefully and strategically incorporate into business operations by the Chief Robotics Officer.

Discover how industry will get there at Drive Manufacturing Summit in just a few months.

Be part of the Industry 5.0 Revolution

Matt Rendall is CEO and Co-Founder of OTTO Motors where he is responsible for developing the company’s strategic vision and the commercialization of self-driving vehicle technologies. His thought leadership brought the company early success, along with a variety of accolades including the Ernst & Young Entrepreneur of the Year Award for Young Entrepreneur and Business Insider’s 40 Under 40 People to Watch recognition. Matt is the host the Drive Manufacturing Summit in Milwaukee, Wisconsin, October 2 – 4, 2017.