The Benefits of Automating Production Lines with Robots

The use of robots in industry is nothing new. Since the early 60s, industrial robots have been used to weld, paint and assemble parts to create the products used in homes and businesses. Compared to humans, robots move faster and with greater accuracy. They are increasingly used in manufacturing to work alongside humans to take on monotonous, difficult or dangerous parts of a production process.

Production line, or assembly, robots are perfect for tasks requiring both speed and accuracy. Additionally, they are beneficial in environments that demand immaculate cleanliness such as pharmaceuticals or medical device assembly. Robots never tire, get ill or suffer debilitating injuries, making them a valuable investment for businesses in a range of manufacturing verticals.

The Many Different Types of Robots

The significant upfront cost of installing robots in production lines has made businesses wary to invest in them in the past, but thanks to longer-term ROI projections and the increasing flexibility of robots more businesses are looking to them for increasing their productivity and bottom lines.

There are hundreds of different types of robots performing a multitude of tasks. These operational functions are commonly categorized using criteria such as types of movement (degrees of motion), application (welding, material handling, etc.), architecture (serial robots and spider robots) and collaboration – a relatively new type of robot that can work alongside humans without being caged off.

Regardless of the manufacturing niche, it is likely that there is a robot already available which can aid the production process and bring a number of benefits for business.

The Benefits of Robots for Production

Assembly robots are often built with vision and force-sensing specifications, enabling them to pick up components from a conveyor belt and insert them into the appropriate part of the incomplete product. For collaborative robots, these features allow them to work alongside humans safely and assist in picking up parts too small for humans to manage or apply seals and adhesives that need precision application or may be too toxic for people to handle. The features make robots the perfect co-workers for technical or complex product assembly lines.

When equipped with vision and force-sensing capabilities, robots can quickly be reconfigured to accommodate product design changes or even work on new lines, making them extremely useful for manufacturers of products with short product life cycles.

Usually requiring no more maintenance than a simple change of program, collaborative assembly robots are a low-risk investment for businesses.  The benefits of businesses incorporating robots into their production lines are endless. The flexible functionality of robots satisfies the changing demands of manufacturing.  In addition, robots are designed with quality and financial considerations with a lower initial outlay and a shorter term of ROI, overshadowing their closest mechanical rival – dedicated assembly line equipment – by a long shot.

It is the introduction of collaborative robots that is exciting many manufacturers now. The decrease in cost (an average of $20,000) and the lighter, more collaborative “plug and play” generation of robots with advanced vision and sensor technologies are allowing business owners to augment their human workforces with robotic assistance. If a human gets in the way of a robot on the production line, it will simply stop until its path is again clear. 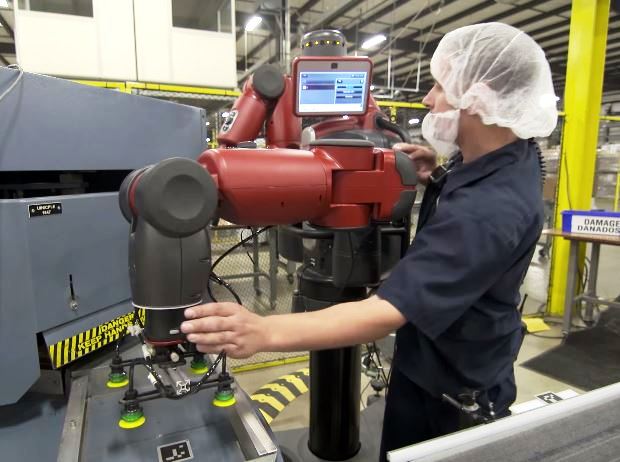 Greater accuracy, increased production, and a trend toward decreasing cost of the initial outlay are making robots in manufacturing much more attractive for a larger number of businesses, even smaller businesses which aren’t multinational corporations. As they become further developed, lighter and able to handle more diverse manufacturing environments, robots for automating production lines will become even more commonplace.