The so-called ‘no code’ revolution in programming seeks to make the automation industry more autonomous and to democratize the use of robotics at the shop floor level. 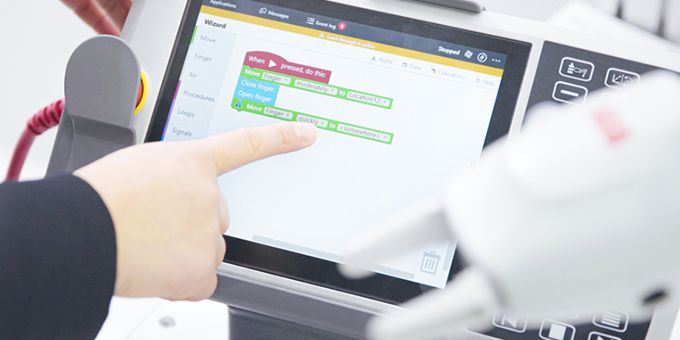 Factories of the future will undoubtedly become increasingly agile and autonomous. If manufacturers want to keep up with the latest requirements, their robots need to also become faster and easier to implement. The so-called ‘no code’ revolution in programming seeks to make the automation industry more autonomous and to democratize the use of robotics at the shop floor level. Here, Claudia Jarrett, US country manager at industrial automation supplier EU Automation, discusses the benefits of investing in no-code robotics for all types of factories.

The no-code revolution consists of a series of tools that have been created to democratize access to technology that was formerly inaccessible to most industrial plants. Its aim is to simplify complicated processes, like programming, to allow more people to use robotics and address some of the challenges of manufacturing.

One of the most concerning is the increased cost of equipment and advanced technologies required for digitalisation. The other pressing challenge is the skills gap between the required know-how for programming, integrating and operating the machines and the capabilities operators possess. According to a study by Deloitte, this will lead to an estimated 2.4 million positions left unfilled between 2018 and 2028 in the manufacturing sector.

Training employees is a costly and time-consuming task, and it can also be useless due to ever growing automation of facilities. Waiting for programming and debugging phases is also a long, complex process.

Instead of investing time and resources on training employees on difficult programming languages that will become obsolete after a few years, companies can benefit from acquiring no-code robots. Not only are they easier to operate, but also more cost efficient and flexible too.

One of the core ideas of the democratization of coding is allowing more people to install and use a robot without programming knowledge. Hence, the main advantage of no-code robotics is its ease of use.

With no-code robotics, teaching a robot to do a job can be as easy as moving its arms for the desired task. Not only that, but robots can also switch easily from one application to another, increasing their cost effectiveness for manufacturers.

For example, robotics experts at Wandelbots designed robots that can carry out modified or completely new tasks in a matter of minutes. They can do so remotely and without any prior programming. Similarly, ABB Robotics is using a platform, named Wizard, to program its single-arm YuMi® robot — an easy graphical interface allowing users to simply drag and drop functions and see the results in seconds.

Instead of investing in multiple robots for a specific task, no-code robots can be reprogrammed to do different jobs by adjusting their arm for the next action. This option could prove highly profitable, especially for smaller companies, and ensure a quick return on investment (ROI). Traditional industrial robots are usually bulky, expensive, inflexible, difficult to program and require safety fencing and dedicated floor space. This kind of investment might prove too big a task for smaller manufacturers.

On the other hand, no-code robots and cobots are lightweight, space-saving and easy to redeploy and reprogram. For example, UR10, the largest universal robot weighs less than 30 pounds (just over 60kg), making it easy to be moved from one location to another on the factory floor. With intuitive 3D visualization, operators simply move the cobot arm to desired waypoints, reducing teaching time to less than an hour. The same action can then be reproduced to teach the cobot a different task.

Although automation is becoming more flexible and autonomous, requiring less input from users, coding will remain essential for more complex tasks, such as in palletizing applications. Nevertheless, by making robots easier to deploy, automation becomes more democratised and scalable.

For the time being, no-code robots are used in simple applications, due to the technical difficulty of teaching robots to perform autonomously without any programming. However, the no-code revolution is indeed a trend to watch in the coming years. At EU Automation, we are always on the lookout for the latest advancement in automation, updating our offerings of automation parts. From PLCs to motors and drives, we cater for all needs, helping manufacturers progress and democratize the field of robotics.

To find out more about our list of products, head to www.euautomation.com.