The use of drones in law enforcement is a much more recent phenomenon than the military use of drones, which explains why the public is less familiar with the issue, but we're hoping to change that!

Q&A with INTERPOL World 2017 Speaker Mr Holland Michel, Co-Director for the Center for the Study of the Drone

Can you share with us the work that you’ve done in the Center for the Study of the Drone, and what brought you to this field?

The Center for the Study of the Drone is an inquiry-driven research and education initiative founded in 2012 at Bard College that studies the challenges and opportunities presented by unmanned systems technology in both military and civilian spheres. Since our founding, we have studied a broad range of topics, from U.S. military spending on unmanned systems technology through to the use of drones for making art. I have personally been involved in research projects examining close encounters between drones and manned aircraft in U.S. airspace, the historical development of a range of key military unmanned systems, the U.S. drone services industry, loitering munitions technology, and local laws governing drone use in the U.S.

I founded the Center in 2012 because I knew that drone technology would become an increasingly challenging and polemic issue as these systems became more common in both military and civilian domains, and I believed that the public discussion among stakeholders would benefit from the existence of an independent, non-partisan, interdisciplinary research institution that could produce resources that could be used by a wide variety of stakeholders. I believe that drones will always present new, complex, and interesting issues, so I know that there will always be something new that needs to be studied.

You’ve written extensively about drones in warfare, and that is something that the public might be more familiar with. What about drones in law enforcement – how does it play a part in protecting civilians in urban environments?

The use of drones in law enforcement is a much more recent phenomenon than the military use of drones, which explains why the public is less familiar with the issue, but we're hoping to change that! Law enforcement agencies are turning to surveillance drones for many of the same reason that the military uses them: having an eye in the sky is often helpful for establishing situational awareness during operations and collecting information in hazardous environments without endangering human operators. Law enforcement agencies believe that drones could serve as a force multiplier that will allow them to accomplish a range of tasks, from search and rescue to crime scene imaging, much more quickly, cheaply and, in some cases, efficiently, than traditional manned options.

What are some of the global trends around the use of drone technology, specifically in security and public safety?

We are seeing a greater push toward more autonomous systems with features like obstacle avoidance, and "follow me" modes. We are also seeing incredible improvements in the sensors on board the drones: manufacturers are increasingly producing very high resolution infra-red and daylight imaging systems that open up all sorts of new possibilities. Finally, we are seeing a lot of interest in tethered systems like the CyPhy Works PARC, which have effectively unlimited flight time. On the applications side, the most common uses that have emerged are search and rescue and crime scene imaging. So far, overwatch for live operations and routine patrols have been somewhat less popular.

What are the latest (or future) innovations that can be expected?

In the short term, we are going to see incremental improvements in capability and safety, largely thanks to better autonomy. In the long term, we are going to see larger systems that have longer endurance (most of the current drones used by law enforcement today only weigh a couple of pounds and can't fly for more than 30 minutes on a single charge). I think we're going to see more tethered systems, and I also predict growth in the use of lighter-than-air unmanned vehicles.

With criminals and crime becoming ever more sophisticated, how much can the use of drone contribute to detecting and preventing crime? Or is drone mainly a reactive tool?

So far, drones have mainly served as a reactive tool, which is partly a function of their limited capabilities. The use of drones for proactive crime-fighting will probably require greater flight times and better endurance that will enable broader, more persistent surveillance of areas. In the near term, drones may certainly play a proactive role in security operations for large events, for things like monitoring perimeters or choke points, but I think some of those applications will remain fairly narrow until the technology evolves further.

Do you see a time where law enforcement drones are weaponized?

Yes, I have no doubt that certain law enforcement agencies will eventually seek to use weaponized drones. We already saw that police in Dallas used a explosive-laden unmanned ground vehicle to kill a shooter during a protest last July, thus bringing an end to a violent standoff that could have resulted in further casualties if it had carried on. This serves as proof that weaponized unmanned systems could be useful in certain circumstances. But there are a whole host of very thorny legal issues that need to be addressed before weaponized systems are adopted at scale—Is it ethical to use a drone to kill a person? Who is responsible if a drone kills the wrong person? Will weaponized drones lower the threshold for lethal action by police? How should these systems be regulated?—and there will likely be a great deal of public pushback in many jurisdictions where such a technology is proposed.

How do you think the future of drone technology will look like?

More, more, more, is how I predict the future will be. More drones, more people using them, better capabilities in the drones, and more applications for the technology. As a result, the skies of the future are going to be filled with drones. Not only police drones, but also other civil drones carrying out crucial public functions, commercial drones, large freight drones, and personal hobby drones. But there are many challenging technological and regulatory questions that stand between us and that future.  Drones need to become more autonomous and more networked, aviation authorities must implement effective and robust air traffic management systems for drones, which is a daunting challenge, would-be drone users will need to continue to develop the best uses for the technology, and regulators still have a way to go in implementing regulations that enable wide-scale integration of the technology while also protecting citizens from potentially harmful drone use. There is much work that is happening to push us in that direction, but we're still not there yet, and I believe the process is going to require the input of many more stakeholders, as well as the public at large. 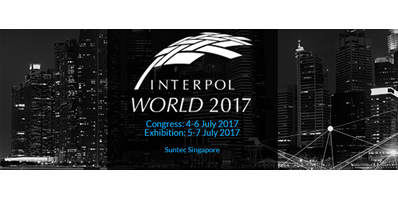 About INTERPOL
INTERPOL World is an event providing a strategic platform for the public and private sectors to discuss and showcase solutions to evolving global security challenges. To be held in July 2017 at Suntec Singapore, this biennial exhibition and congress event aims to connect law enforcement, government bodies, academia, international security professionals and buyers with security solution providers and manufacturers. The event fosters mutually beneficial collaboration, information sharing, innovation and solutions to ensure faster and more accurate responses to security threats.

About Arthur Holland Michel
Arthur Holland Michel is an author, researcher, and the co-director of the Center for the Study of the Drone at Bard College, an interdisciplinary research and education institute that examines the challenges and opportunities associated with the proliferation of unmanned systems technology in military and civilian spheres. Mr. Holland Michel is particularly interested in how stakeholders can leverage innovative research and inquiry-driven resources to get ahead of the adoption curve of emerging technologies and effectively anticipate the potential social, economic, legal, and ethical implications of these systems. He has written extensively about drones, robots, and defense for a variety of publications, including Wired Magazine, The Oxford Research Encyclopaedia of Crime, Media, and Popular Culture, Vice, Al Jazeera America, Fast Company, Bookforum, U.S. News, the Verge, and the New York Daily News, among other publications, and is the co-author of a number of research reports, including “The Drone Primer: A Compendium of the Key Issues,” “Drone Sightings and Close Encounters: An Analysis,” "Local and State Drone Laws," and “The Drone Revolution Revisited: An Assessment of Military Unmanned Systems in 2016.” He is the author of a forthcoming book about airborne surveillance technology, to be published by Houghton Mifflin Harcourt in 2018.