Kickstarted at $3M, How Tiko is Set to Be the Best and Cheapest 3D Printer 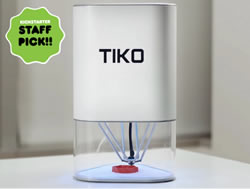 Sage Lazzaro for The Observer:  When we last talked with the folks from Makerbot, we discussed how 3D printers will soon be household appliances as common as microwaves, vacuums and well, regular printers. But they agreed that certain design and affordability standards need to be met first. Little did we know, a 3D printer set to meet those standards was being developed in Toronto as we spoke.
We’re talking about Tiko, the meticulously designed and shockingly affordable “unibody” 3D printer that’s had the industry’s experts and publications buzzing. The $179 3D printer surpassed its Kickstarter goal of $100,000 in three hours and finished up its campaign last Friday with a total of just under $3 million in pledges.
Tiko looks nothing like any 3D printer you’ve seen before. While most have a multipart frame, Tiko’s frame is one piece with three sets of arms that move in unison, essentially eliminating issues of misalignment or inaccurate prints associated with other products. The New York Observer spoke with Tiko founder and CEO Matt Gajkowski, who explained that Tiko’s unique design is actually essential to its affordability.  Cont'd...
More Mobile & Service Robots Stories | Articles | News