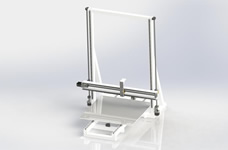 Founded by mechanical engineer Clay Guillory, who calls himself “a mechanical engineer by day, and a mechanical engineer by night,” Titan Robotics focuses on doing one thing and one thing very well: designing large 3D printers that are designed to last a lifetime.  Among other applications that Clay has used his 3D printing know-how towards include prosthetic hands - which started as a request from a mother whose 8-year old boy was in need of a low-cost solution.
Titan Robotics’ Atlas 3D printer was named after the famous Greek god who was known for fighting alongside the Titans and then later charged to bear the weight of the heavens on his shoulders.  According to Clay, “the strength of this Greek god is an accurate depiction of the strength and size of this new 3D printer”.
With over a year in development including real-world testing in various manufacturing facilities, the Atlas has proven to be a highly-accurate 3D printer that is capable of printing large prototypes reliably over time.  According to the company, one beta user documented printing an extremely large accurate and functioning prototype with a total recorded print time of just over 200 hours.
More Mobile Robots Stories | Articles | News