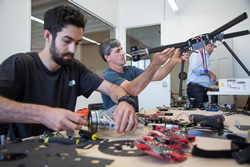 By Thomas Black for Bloomberg Business:  Startup drone makers are finding record amounts of funding as venture capitalists prowl for early winners in what may become an $82 billion industry.

“Everybody wants to invest in drones because they’re seeing not only the potential but actual results right now,” said Jon Ollwerther, vice president of marketing and operations at drone builder AeroCine, which operates from a waterfront Brooklyn warehouse with a view of the Statue of Liberty. “We have said no to money.”

There’s more than ever to go around. Investors have pumped $210 million into businesses like SZ DJI Technology Co. and DroneDeploy so far in 2015, almost double the total for all of last year, according to data compiler CrunchBase. The pace has quickened as U.S. regulators grant more exemptions for limited commercial operations, reassuring financial backers that they’ll see a payoff from their support.  Cont'd...