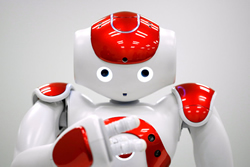 by Shigeru Sato and Monami Yui for Bloomberg Business:   Venture capitalists who have long avoided investing in Japan may think again as startups in the country develop a new generation of robot technology, according to consultant Koichi Hori.
While Japan has little chance of catching up to the U.S. in digital media, the next phase of technological innovation will be in robotics with artificial intelligence, said Hori, who headed Boston Consulting Group Inc.’s Japan office before founding Dream Incubator Inc. in 2000. That plays to Japan’s strengths in engineering, he said.
“Digital media will only be in the mainstream for about three years, or five years at most,” Hori, 70, said in an interview in Tokyo on May 27. “From that time on, robots and robotics will be the eye-catchy industries. Japan has a good chance, particularly in the area of hardware for robots.”
Prime Minister Shinzo Abe is pushing for a “robot revolution” to help reclaim the dominance of Japanese technology after companies such as Sony Corp. lost ground to Apple Inc. and Samsung Electronics Co. With venture investment less than 3 percent that of the U.S., Japan has struggled to replicate Silicon Valley’s success as a hub of innovation.  Cont'd...
More Other Topics Stories | Articles | News