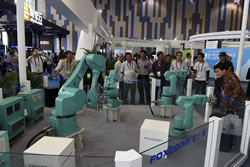 By TIMOTHY AEPPEL and MARK MAGNIER for WSJ.com - Having devoured many of the world’s factory jobs, China is now handing them over to robots.

China already ranks as the world’s largest market for robotic machines. Sales last year grew 54% from a year earlier, and the boom shows every sign of increasing. China is projected to have more installed industrial robots than any other country by next year, according to the International Federation of Robotics.

China’s emergence as an automation hub contradicts many assumptions about robots and the global economy.

Economists often view automation as a way for advanced economies to keep industries that might otherwise move offshore, or even to win them back through reshoring, since the focus is on ways to reduce costly labor. That motivation hasn’t gone away. But increasingly, robots are taking over work in developing countries, reducing the potential job creation associated with building new factories in the frontier markets of Asia, Africa or Latin America.  Cont'd...