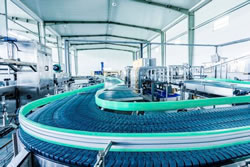 By Conner Forrest for TechRepublic:  In Dongguan City, located in the central Guangdong province of China, a technology company has set up a factory run almost exclusively by robots, and the results are fascinating.

The Changying Precision Technology Company factory in Dongguan has automated production lines that use robotic arms to produce parts for cell phones. The factory also has automated machining equipment, autonomous transport trucks, and other automated equipment in the warehouse.

There are still people working at the factory, though. Three workers check and monitor each production line and there are other employees who monitor a computer control system. Previously, there were 650 employees at the factory. With the new robots, there's now only 60. Luo Weiqiang, general manager of the company, told the People's Daily that the number of employees could drop to 20 in the future.

The robots have produced almost three times as many pieces as were produced before. According to the People's Daily, production per person has increased from 8,000 pieces to 21,000 pieces. That's a 162.5% increase.  Cont'd...