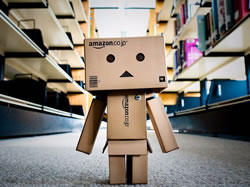 Jillian D'Onfro for Business Insider:  Amazon is ramping up its robotics efforts and testing new technology that could make it safer to operate the fleet of robots toiling in its warehouses, according to recent FCC filings.

The FCC gave Amazon Robotics an expedited experimental license to test a "proximity sensing system" that the company hopes to deploy in fulfillment centers outside the U.S.

Amazon Robotics "seeks to evaluate radiolocation technology to be used in the operation of robotics in fulfillment centers outside the United States," the company said in the filing, the first such FCC filing by Amazon Robotics.

While Amazon stresses that the technology is strictly for internal use, and not something it intends to sell to "end users," the filing underscores the company's increasing investment and innovation in robotics, which has the potential to transform a broad swath of industrial and consumer markets.   Cont'd...