'Darwin' the thinking robot teaches itself how to walk, just like a child 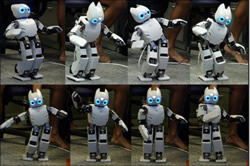 Andre Mitchell for ChristianToday:  Just like a real human toddler, a robot is learning how to take baby steps inside a laboratory at the University of California Berkeley.

The state-of-the-art robot mimics the behaviour of a child so realistically that it also falls as it attempts to take its first steps.

What is even more impressive is that the robot, nicknamed "Darwin," is actually teaching itself how to walk, much like a little child.

The robot's developers, Pieter Abbeel and his team at UC Berkeley's Robot Learning Lab, explained that Darwin is not like other robots that are programmed to do only a set of things.

This robot has a neural network designed to mimic the human brain, through which it undergoes the process called "reinforcement learning."

"Imagine learning a new skill, like how to ride a bike. You're going to fall a lot, but then, after some practice, you figure it out," one of Darwin's developers, computer scientist John Schulman, explained in an article on NBC News.  Cont'd...