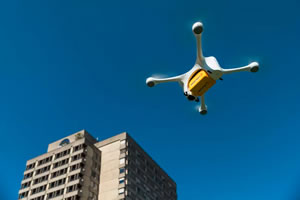 James Vincent for The Verge:  A pair of hospitals in the Swiss city of Lugano have been testing the use of drones to transport laboratory samples. Since mid-March, logistics company Swiss Post has operated more than 70 tests flights between the two hospitals, and announced today that it plans to establish a regular service by 2018.
This isn’t the first time we’ve seen drones used to transport medical samples. (Silicon Valley firm Zipline uses fixed-wing craft to carry out this task in rural Rwanda.) But Swiss Post claims it’s the first ever commercial deployment of drones in an urban area. Operating drones in towns and cities is particularly challenging due to the risk of civilian injury, but Swiss Post says it has been working with the country’s aviation regulators, FOCA, since tests began earlier this year.  Full Article: