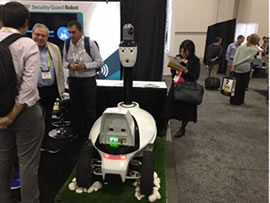 Joel Griffin for Security InfoWatch: Ā The thought of using robots as guards may seem like a far-fetched notion to some, but the technology itself is already mature and starting to gain traction in the security industry. For proof, one need look no further than the Unmanned Security Expo taking place at ISC West this year, which features a host of companies showing off the latest in aerial drone and robotic technology.

When Knightscope first introduced its autonomous data machines (ADMs) to the industry in 2013, the thought at the time was that, while a novel concept, robotic technology wouldnt be taking off in the market anytime soon. Now, just four years later, Knightscope has inked partnership deals with some of the industrys largest guard services firms, such asĀ Universal Protection ServiceĀ (now AlliedUniversal) andĀ Securitas, and has seen its ADM units deployed in a wide variety of applications including hospitals, malls, stadiums, and corporate campuses. Ā