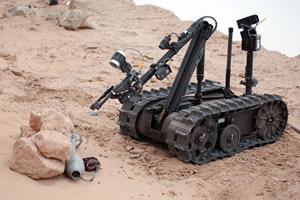 Jen Judson for Defense News:  The Army is poised to transform the ground robotics industry over the next year as it launches several competitions to define its future unmanned ground systems fleet.
By necessity, during the wars in Iraq and Afghanistan, the Army clamored to buy unmanned ground vehicles that could help provide a level of standoff between soldiers and the dangers faced on the battlefield, mostly improvised explosive devices.
Due to the rapid procurement of roughly 7,000 UGVs, the Army now has a petting zoo of various ground robots from Talons to PacBots to Dragon Runners.
A quick tour through the one-room museum at the Robot Logistics Support Center at Selfridge Air National Guard base in Harrison Township, Michigan, shows the invention and evolution of many of these robots. And a walk through the warehouse reveals only a glimpse of the extent of work the Army is still doing to keep the robots rotating in and out of use in the field.  Full Article: