The next great CEO could be a robot, Alibaba's Jack Ma says 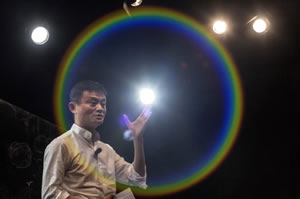 Brett Molina , USA TODAY:  Forget about robot factory workers. Our business future could include a machine as one of the world's top chief executives.

Jack Ma, the founder and chairman of Chinese e-commerce titan Alibaba, predicts "a robot will likely be on the cover of Time magazine as the best CEO" in 30 years, according to published reports.

The comments were part of a speech giving during a conference hosted by the China Entrepreneur Club, during which he warned the world must prepare for the disruption caused by robots and the use of automation in the jobs market.

"In the next 30 years, the world will see much more pain than happiness," said Ma.

Long term, Ma predicts robots will help humans, even contributing to a shorter work week. "In 10 or 20 years, people will work less than four hours a day, maybe three days a week," said Ma, as reported by CNN.  Full Article: