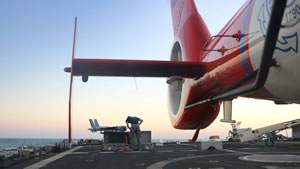 Neha Thirani Bagri for Quartz:  At any time, the US coast guard has just three to five cutters, or large manned vessels, assigned to patrol about 6 million sq miles of sea spanning the Caribbean and the Gulf of Mexico to the eastern Pacific Ocean, through which most of the cocaine bound for the US passes.

To tackle the momentous task of monitoring these vast stretches of ocean, this year the coast guard began to use the ScanEagle, a Boeing-manufactured, 10-ft-long drone similar to a model that was used by the US marine corps in Iraq. The drone recently concluded a six-week deployment in the eastern Pacific Ocean with the coast guard cutter Stratton.

The ScanEagle is launched into the skies from a catapult on the flight deck and scans the surrounding waters for targets, the Associated Press reported from aboard the Stratton. The drone takes into account things like a vessel’s size, cargo, and movement, to determine if it might be a security threat. When a “target of interest” is detected, a go-fast boat is launched, and the chase begins.  Full Article: