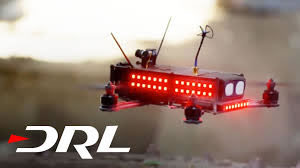 Marco Margaritoff for The Drive:  The 2017 season of Drone Racing League (DRL) will commence next Tuesday, at 8pm (ET) on June 20th. DRL pits the top drone pilots from around the world, maneuvering high speed quadcopters through fluorescent courses built around iconic international locations. We're one week away from the opening race and DRL has completed yet another round of Series B funding. According to TechCrunch, the additional $20m dollars comes from a combined effort from Sky (Telecommunications), Liberty Media Corporation (who actually owns the "Formula 1" racing brand), and Lux Capital.

Not too shabby, especially since DRL has already raised capital from Allianz (sponsor of the Championship) and World Wrestling Entertainment, bringing their total to a whopping $32m. This funding adds much needed validity to the future success of the bleeding edge sport of drone racing, all while setting a precedent for how valued this new market is.

Drone Racing League season one began in 2016, to an overwhelmingly large broadcast audience of over 28.2 million people in the United States alone. Instead of broadcasting live, DRL schedules air dates for episodes, so they can reach as many fans in all available time-zones as possible, as opposed to losing a chunk of their audience by committing to live broadcast date. Season two promises improvements, namely then new Racer 3, capable of speeds up to 90 mph, a significant increase from last year's 80 mph threshold.   Full Article: