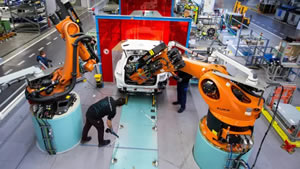 Patrick McGee for Financial Times:  Kuka, Germany’s largest maker of industrial robotics, plans an ambitious move into the world of personal assistant robots with the help of Midea, the Chinese appliance maker that acquired it for €4.5bn last year.

Till Reuter, Kuka chief executive since 2009, told the FT he sees potential to draw on Midea’s consumer expertise to create robots that would help out on household tasks.

“Midea is not doing any robotics or automation, so Kuka is automation for Midea,” he said. “And they are very well connected to the consumer industry. So together we want to do consumer robotics.”

Kuka is best known for its orange robot arms used to build cars for Tesla and Porsche — as seen in the 2002 James Bond film Die Another Day. It has never built humanoid robots such as SoftBank's Pepper, the “day-to-day companion” that moonlights as a cell phone shop assistant in Japan.

But Mr Reuter said the consumer industry is developing “much faster” than the industrial side. His hope is that Midea, which makes everything from bladeless fans to air conditioners, will be able to combine forces with “German DNA” and build robots for home use.

Kuka’s main competitors on industrial robotics are Japan’s Fanuc and Switzerland’s ABB. Just over 250,000 industrial robots were sold in 2015 as companies invest in automation, according to the International Federation of Robotics.  Full Article: