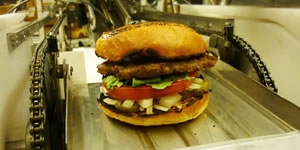 Daniel Liberto for Investopedia:  Robots capable of churning out 400 hamburgers in an hour could one day become a permanent fixture across fast food chains. Momentum Machines, the Google backed startup that specializes in building these high-tech, artificial intelligence-powered devices, has just secured over $18 million of new venture capital, according to an SEC filing.

San Francisco-based Momentum Machines debuted its prototype burger-making machine in 2012, eliciting awe from tech geeks and criticism from employment activists. It’s not hard to understand why: the startup’s robots can grill a beef patty, layer it with lettuce, tomatoes, pickles, and onion, before putting it in a bun and wrapping it up to go 400 times in an hour — a feat that no human could ever hope to achieve.

This revelation prompted former McDonald's CEO Ed Rensi to tell Fox Business last year that these machines could provide a huge boost to fast food chains, particularly as the industry is under pressure due to rising minimum wages. "It's cheaper to buy a $35,000 robotic arm than it is to hire an employee who's inefficient making $15 an hour bagging french fries,” he said.  Full Article: