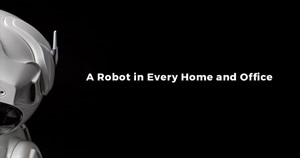 Alex Knapp for Forbes:  Toy startup Sphero has made a name for itself making connected toys, most famously their toy version of Star Wars' BB-8 droid. Now they're spinning out a new company, Misty Robotics, which has set forth the relatively modest goal of putting a robot in every home and office. And not just silent drones, either. Misty wants to build robots like R2-D2 or Rosie from The Jetsons - useful companions with personality.

Misty Robotics was cofounded by former Sphero CTO Ian Bernstein and serial entrepreneur Tim Enwall. On Tuesday, the company announced that it's closed a Series A funding round of $11.5 million. Sphero also holds a minority state in the company.

There are two key robotics approaches that the company believes distinguishes it from other ongoing companies. The first approach is building robots capable of doing more than one thing - it's not practical, Bernstein argues, to have a bunch of robots that only do one thing, like a robot to clean the gutters and another to clean the pool and another to vacuum the floor.

"Robots in the home need to be more multipurpose," he said. "Our big vision is like Rosie from The Jetsons - for robots to be present in our lives, cooking food, cleaning houses and doing all kinds of things."

To that end, Misty sees robots as platforms that other developers can use to be creative with potential robotics applications, like a smartphone or a PC.  Full Article: