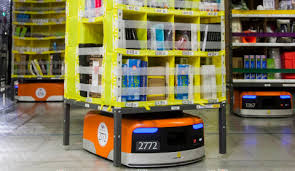 Joshua Brustein for Bloomberg: ô Sixteen teamsô ofô robotics researchersô are traveling to Japan this weekô to help Amazon.com Inc. solve its warehouse problem. The company has aô fleet of robots that drive around its facilitiesô gathering items for orders. But it needs humans for the last stepô ã picking up items of various shapes, then packing the right ones into the correct boxes for shipping. Its a classic example of an activity thats simple, almost mindless, forô humans, but still unattainableô for robots. Starting Thursday, the company is running theô Amazon Robotics Challenge, the third annualô contest for robots that push those limits.ô
Both academic and commercialô roboticists have been putting a lot of energy intoô solvingô whats sometimes referred to as theô ãpickingã challenge, and Amazon is trying to direct that energy towards its specific needs. In one part of the contest, teams fill aô shelfô with aô random assortment of itemsô that Amazon providesô ãô a champagne glass, a roll of duct tape, scissors, a childrens book entitledô ãRobots, Robots Everywhereãô ã and their robots pull out specific items, packing them into boxes that represent pretend Amazon orders. Inô another, robots confront a jumble of items, and pack them onto shelves that resemble those in Amazon warehouses, remembering where each one went. Theres about $250,000 of prize money at stake, including $80,000 for the top prize.ô
ô
Amazon gets nothing out of this, directly. But their own robotics team can potentially pick up techniques, or even new colleagues -- it has hired people who have entered past contests. More broadly, having robots that could reliably carry out the tasks from the challengeô on their own would be a big stepô towardsô fully autonomous warehouses, which theoretically could run faster,ô cheaper, and around the clock.
ô
This raises uncomfortable questions aboutô the future prospects for warehouse workers. In May, thereô wereô 949,000 people working inô theô warehouseô and storageô industry in the U.S., making an average wage of just under $20 an hour,ô according to the Bureau of Labor Statistics. The number of people working in the warehouse industry has grown 43 percent overô theô last decade, and wages have kept pace with inflation, even as a first wave of automation has taken place. Optimists argue that more automation leads to more growth, creating better jobs elsewhere. Pessimists are basically predicting that artificial intelligence will usher in an economic apocalypse. ô Full Article:
ô