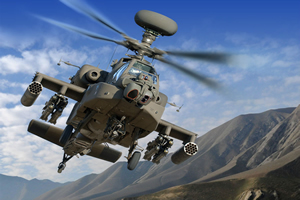 The emerging technology expands upon currently operational MUM-T that allows Apache and Kiowa helicopter crews to view real-time feeds from nearby drones while also controlling the sensor payload.

The most recent operational MUM-T technology, called Level 4 LOI (Level of Interoperability 4), has been used with great success in Afghanistan by the 1-229th Attack Reconnaissance Battalion.  Full Article: