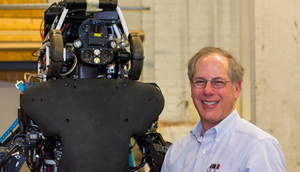 WPI.edu:  As Mike Gennert steps down after 10 years as the founding director of the Robotics Engineeringprogram at WPI, consider the program’s extraordinary success.

Begun in 2007, the university’s undergraduate degree program in robotics—the first ever in the nation—awarded its first four bachelor’s degrees in 2009 to students who switched majors. This past year 75 such degrees were awarded.

“Not to mention the 56 master’s degrees and two PhDs,” says Gennert, whose last day as director was June 30.  The program has awarded 391 bachelor’s degrees since it started, he says.

In 2006 WPI offered two robotics courses. Now there are 20+ courses and 11 labs just for robotics, combining the disciplines of computer science, electrical and computer engineering, and mechanical engineering.

“It’s a lot of things,” says Gennert, who is leaving on sabbatical but will be back to teach computer science and robotics. “One is this is now the best-established, best-known undergraduate program in robotics in the country. That’s certainly a factor.”