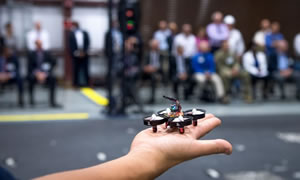 David McNally, ARL Public Affairs:  Researchers from industry and universities across the nation have rallied around a collaborative technology alliance with the U.S. Army Research Laboratory since 2008.
A research program called Micro Autonomous Systems and Technology, or MAST, came to its conclusion during a capstone event of presentations and demonstrations from Aug. 22 - 24 of both ground and air micro-robots.
Teams of researchers gave 17 live demonstrations of the technologies they've been working on over the past several years. The University of Pennsylvania showcased a group of autonomous quadcopters that self-organize into formations.
Officials said technology has advanced dramatically during the life of the program.
"I think there's still a long way to go to get them to do all of the behaviors we want in any type of environment," said Dr. Brett Piekarski, the Army's collaborative alliance manager. "There are certain areas where I think we've really pushed the bar and moved the state-of-the-art. One example is in scaling things down to be able to do autonomous behavior in something that fits in the size of your hand."
Piekarski has been with the program since its inception and has managed the alliance of Army, industry and university researchers since 2012.
"In one way, I'm a little sad to see it end," he said. "In another way, I'm really excited because I think we pushed the boundaries of the state-of-the-art and we will be seeing the impact of the advancements within the program for years to come."  Full Article: