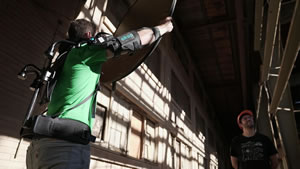 David Silverberg for Motherboard:  One of the most staid and digitally conservative industries is on the verge of a robotic makeover.

The global construction space isn't known for ushering new tech into their workforce, but a painful labour shortage, calls for increased worker safety and more low-cost housing, and the need to catch up to other tech-savvy sectors is giving upstarts in robotics and exoskeletons their big moment.

Even so, there's concern that automation could put some workers out of a job. According to a report from the National Bureau of Economic Research, each additional robot in the American economy lowers employment by 5.6 workers, and every robot that is added to the workforce per 1,000 human workers causes wages to drop by as much as 0.25 to 0.5 percent.

The construction industry isn't immune to this phenomenon, but robots and humans may increasingly work hand-in-hand in industrial sectors, according to Brian Turmail, senior executive director of public affairs at the Associated General Contractors of America. This is especially true when the construction industry en masse uses exoskeleton vests, which aim to assist workers with heavy loads and thus reduce their risk of injury.

But some robots may do the majority of back-breaking work for construction workers that repeat the same routine for hours.  Full Article: