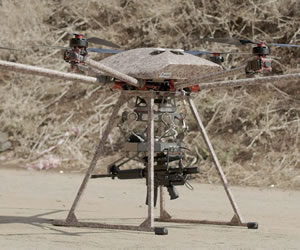 Rich Haridy for New Atlas:  In 2015, a video showing a semi-automatic handgun being fired from a custom-built drone went viral, raising concerns for authorities, including the FAA. The development of such a DIY device was only a matter of time, as was the commercialization of the technology. Now Florida-based startup Duke Robotics has unveiled the TIKAD, a custom-built multirotor that can carry and fire various military weapons, including semi-automatic rifles and grenade launchers.

Duke Robotics is co-founded by Raziel Atuar, a former Special Mission Unit commander in the Israel Defense Force who was inspired to develop this drone system after experiencing the difficulty of battling terrorist agents that operate within civilian populations. As we have seen in recent years, shooting missiles into populated areas frequently results in horrific collateral damage.

"The primary solution you are left with is sending in ground troops – but this shifts the risk to your troops, which often leads to injuries and casualties," says Atuar. "But, we thought, 'what if there was a better way'."  Full Article: