Sony will relaunch its robotics business in 2018 with a dog-like robot designed for homes. 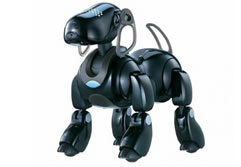 Amit Katwala for IMECHE:  The company is reviving Aibo, a robotic pet dog that was launched in 1999 at a cost of $2000, but shelved in 2006 as part of cost-cutting measures. Despite its high price-tag, the Aibo proved popular – a recent New York Times video focussed on a community of owners now struggling to find replacement parts to keep their beloved pets alive.

The new model will incorporate internet connectivity and have the ability to control domestic appliances with voice commands, like the Amazon Echo or Google Home devices, but will also behave and move like a real dog.

Sony plans to run the new Aibo on an open operating system so third-party developers can add features, while the company says it’s also mapping out advanced electronics that will enable the robot to mimic canine behaviour.

According to Nikkei Asian Review, the move is part of Sony’s attempts to restructure and refocus its business, while taking advantage of its relative strength in mechanical engineering. It represents a strategic shift for the company. In 2016, its president and CEO Kazuo Hirai had suggested a potential move towards industrial robots.  Full Article: