Humanoid robot market to double by 2023, industrial robotics to hit $72B 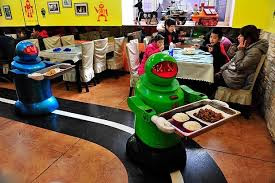 Alison DeNisco Rayome for TechRepublic:  The humanoid robot market will grow from $320.3 million this year to $3.9 billion in 2023, at a CAGR of 52%, according to research from ReportsnReports. This growth will be driven by the introduction of more advanced features in this robots, as well as a number of societal factors, the report found.

By 2023, we will see an increasing use of humanoid robots for education, as well as in the retail industry, to better personalize customer support. The medical and logistics sectors are also interested in integrating more artificial intelligence (AI) via robots, as do industries that run autonomous rescue operations, according to the report.

In 2016, North and South America held the largest share of the humanoid robot market. "The Americas is the early adopter of humanoids for all the major applications, such as public relations, personal assistance and caregiving, and education and entertainment, resulting in the maximum demand for robots from this region," according to the report. However, the Asia-Pacific region (APAC) is expected to grow at the highest CAGR between 2017 and 2023, the report found.  Full Article:

Develop new robotic capabilities with ROS 2 for VxWorks. ROS 2 for VxWorks® project provides custom modifications and build scripts to integrate the Robot Operating System 2 (ROS 2) framework with VxWorks 7. ROS 2 is a set of software libraries and tools that aid in building robot applications. Build ROS 2 for VxWorks using 1) with a VxWorks SDK that is available on the site under a free non-commercial use license; or via 2) with a commercially-licensed VxWorks product.
More Products
Feature Your Product