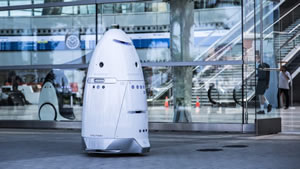 David Z. Morris for Fortune:  A San Francisco animal shelter has announced it will no longer use a Knightscope security robot to patrol its office, after a widely-circulated report that described the robot being used to “deter” nearby homeless encampments and rising crime.

In a statement to Ars Technica, the San Francisco SPCA said it has “received hundreds of messages inciting violence and vandalism against our facility” after the story of the robot went viral. In response to that pressure, the organization will seek “a more fully informed, consensus-oriented, local approach” to the use of security robots. San Francisco authorities had already advised the SPCA to stop using the robot on sidewalks without proper approval.

Mountain View-based Knightscope has said in a statement that the robot “was not brought in to clear the area around the San Francisco SPCA of homeless individuals,” but only to “serve and protect the SPCA.”The fracas reads as the latest installment in a long-running cultural and economic war over the present and future of San Francisco. The recent influx of tech companies and their high-paid employees has helped drive income inequality and make the onetime bohemian mecca the most expensive place to rent an apartment in the United States.  Full Article: