Using Robotmaster software for off-line programming of a 7-axis robot used for the precise trimming required in the manufacturing of General Atomics Predator Drone. 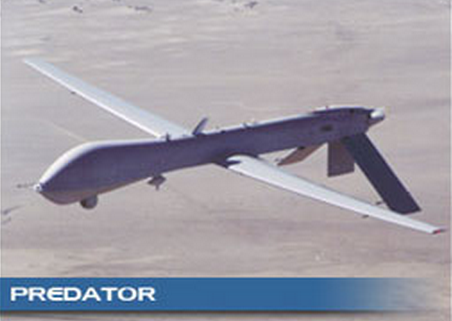 Simple, cost-effective and lethal -- General Atomics’ Predator has gained that reputation after strategic combat successes in the Balkans, Afghanistan and Iraq. Designed for both high-altitude reconnaissance and air strikes, satellite-controlled Predators are flown remotely by US Air Force pilots at Nellis AFB in Nevada.

The Predator is an all-composite aircraft, hand layed up at the GA-ASI's 160,000-ft2 (15,000 m2) fabrication facility south of Rancho Bernardo, Calif., using primarily carbon/epoxy prepregs, and cured in an autoclave.  The prepreg materials are cut on a computerized cutting and kitting machine and core cutting is done on a 5-axis CNC cutting machine. Laser projection equipment helps ensure repeatable and accurate fabrication. Cured laminates are trimmed with a waterjet - waterjets eliminate cutting problems associated with advanced aerospace composites, because they cut by erosive action rather than by friction and shearing. To cut carbon composites, a thin stream of water moving at three times the speed of sound is emitted from a tiny, jewelled orifice in the tool head. The one gallon-per-minute water flow draws in a separate stream of fine garnet particles that slice into the surface being cut. They produce exceptional edge quality, free of frayed or delaminated areas, which minimizes costly secondary finishing.

General Atomics seized an opportunity on the equipment resale market to acquire an impressive waterjet robotic work cell having capabilities to handle very large work pieces - an ideal solution for trimming their 30-foot (9 m) long wing assemblies.  The waterjet is mounted on a Motoman robotic arm that moves along a 40-ft (12.2 m) overhead gantry.  The work cell would be the Aeronautical Systems group’s first foray into the use of robots in manufacturing.  The machine was installed and readied for work.  However, when it came time to upload cutting patterns from their CAD .dxf files, the company’s engineers came to the disconcerting realisation that available software was not up to the job.  Developing tool trajectories for a 7-axis robot work cell directly from CAD design files appeared to be uncharted territory, but was critical to getting value out of the sophisticated equipment General Atomics had acquired, and, ultimately, to meeting their production commitments to satisfy increasing Air Force demand for the Predator.

Discussing the problem with his local Mastercam® reseller, the project engineer learned of Robotmaster™, a software product developed specifically to bring CAD/CAM programming capability to 6-axis robots.   Within a week of explaining the problem to Jabez Technology’s project leader, Robotmaster had been adapted to add control of the 7th axis, the gantry position, to its standard 6-axis robot algorithms. After one day of on-site training General Atomics’ engineers were operational on the system. 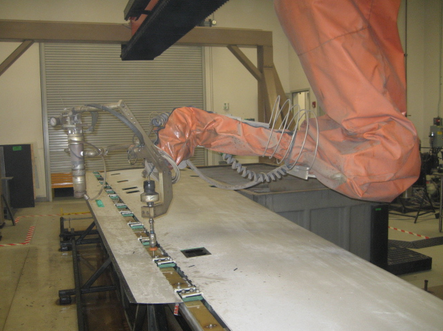 Cutting wing flap hinges to a precision of .005” (0.13 mm) over their 30-foot (9 m) length presented significant challenges in robot calibration and programming accuracy.  With Robotmaster, fine adjustments were made to the CAD model and tool paths were regenerated with mathematical precision, literally by a couple of clicks of a mouse within the fully integrated power of CAD/CAM.  Within weeks, GA-ASI engineers were uploading the final robot programs generated from their CAD files, the feat that all their industry contacts had told them was impossible, and were able to set their new waterjet robot cell to work.

Even though GA-ASI realize that they are using but a fraction of the technical capabilities of their robot work cell and of Robotmaster’s programming power in their application, the installation has justified the Company’s expenditures many times over.  It is fully meeting its quality and precision objectives and has increased the facility’s product output.  Jabez Technologies has made the capability to control translation of a robot along a 7th axis rail and/or an 8th axis rotary positioner a standard feature of Robotmaster as part of their ongoing commitment to provide fast and flexible off-line programming capability for material removal robotics.