When a company announces its intention to introduce Lean practices and implement automated solutions to improve efficiencies, the first concern internally is the displacement of labor. But that was not the case for Otis Technology, a forward-thinking company specializing in the design and manufacturing of gun cleaning systems in upstate New York. The priority was to redeploy labor into value-added tasks in line with its commitment to a Lean philosophy. 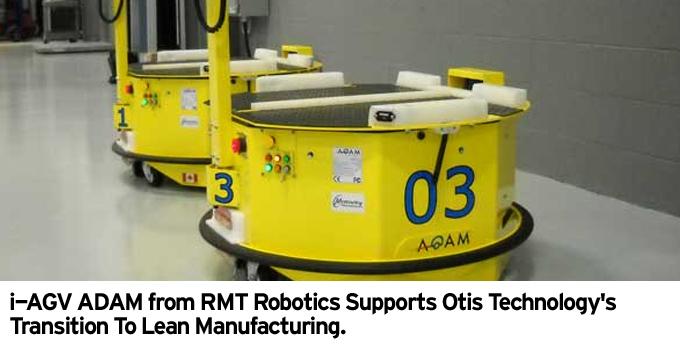 A Fall in the Mud Started the Wheels Turning

Following a fall in the mud and a ruined deer hunt thanks to a mud filled gun, founder and president of Otis Technology, Doreen Garrett, vowed to design a lightweight and portable gun-cleaning system.

In 1985, 16-year-old Garrett invented a portable gun cleaning kit and launched a brand that would become synonymous with quality. Now, 25 years later, Otis is a company with 180 firearm maintenance products that are recognized by professional firearm users as the most advanced gun care system available.

As a family-owned supplier to the United States government and U.S. Armed Forces, the company’s weapons cleaning system is designed to help American soldiers in the field keep their mission on task despite adversity that they may face.

The Otis Breech-to-Muzzle system combines a flexible cleaning rod with a series of brushes and patches now standard issue for many U.S. military personnel. In addition, the company offers high-quality cleaning solutions and in-the-field accessories for competitive sporting, hunting and law enforcement applications.

Made in America and Sustainable Growth

According to Otis Technology founder and president, Doreen Garret, the ability to preserve and promote its "made in the USA" status has helped the company grow market share in the U.S. Armed Forces market and remain competitive on a global basis.

Expansion and Transition to Lean Manufacturing

In 2005 Otis expanded their Lyons Falls, New York operation by opening a 43,000 square-foot manufacturing facility to accommodate its growing business and new product lines. The new facility project offered the company the opportunity to reassess their manual material handling practices, which they had outgrown.

With a goal of creating a sustainable business model and a value-added work environment for its employees, the company adopted a Lean manufacturing approach and began evaluating each process to improve efficiencies, increase accuracy and eliminate waste throughout the building.

The first step towards automation came in the form of an AS/RS system, which allowed for the quick and efficient storage and retrieval of inventory. The challenge still remained to automate the just-in-time transportation of components to and from the AS/RS system to assembly stations and manufactured goods bound for inventory. The current labor-intensive process required employees to walk miles during the day, pushing carts with assembly parts and completed cleaning systems from area to area.

In 2009, Otis project planners aimed to find an automated process that eliminated non-value added tasks and allowed cross-trained employees to be reallocated to value-added services, such as production and quality control. There was also a necessity to alleviate the congestion and assembly error issues caused by the placement of a large quantity of inventory on the floor around the workstations.

“When evaluating assignments we want to ensure all our employees are doing value-added work,” says Mike York, director of operations for Otis. “Transporting materials through a facility is a non-value added task, so we took a look at it and said, ‘we cannot change the whole building but we can change the layout.’ The question then became how do we automate that?”

The Otis team went in search of an AGV solution that easily adapts to continuous environment changes.

“As we went on the Lean journey, we knew we were going to make different work cells and add new processes. Over the next couple of months the floor layout will look different, and another year from now it will be totally changed,” said Larry Williams, President of Operations, Otis. “If you value stream the process and cut the waste out, you find that your footprint becomes smaller and you find better places to put things in the facility.”

The robots would be required to deliver goods from a random origin to a random destination while allowing for safe interaction with employees.

In order to support the just-in-time goals of the Otis operation, product must safely move from random origin to random destination, undaunted by obstructions, machinery and people.ADAM, the world’s first fully autonomous mobile robot manufactured by automated material handling specialists RMT Robotics, was the solution that Otis was looking for. 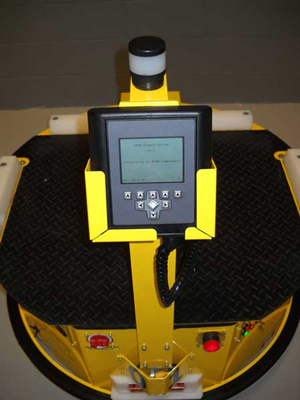 Designed to work like a sophisticated courier service, Otis put ADAMs to work in their facility to automatically connect the random production processes. The system is comprised of three (3) ADAM i-AGVs, automatic battery charging stations, wireless “call” buttons and an ADAM Commander interface computer. Each production station features a wireless ADAM call button. When the call is received from the station operator, the ADAM Commander employs a dispatch algorithm to select the appropriate ADAM vehicle for the task and then wirelessly sends the dispatch instruction to the selected ADAM vehicle. Given the destination and task, the ADAM vehicle is free to autonomously navigate through the facility to the destination. Unlike conventional AGVs, the ADAM vehicle does not require wires, targets or markers, but instead uses “Natural Feature Localization,” “Open Path Navigation” and “Autonomous Traffic Management” as it travels to the destination. 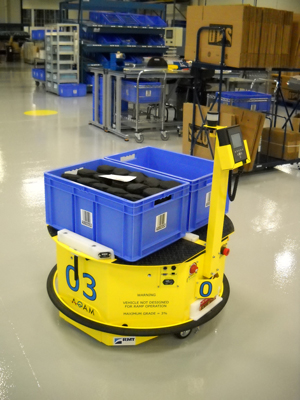 When arriving at the destination, the ADAM i-AGV is manually loaded with product and then assigned delivery locations by the operator via an on-board keypad interface. The operator can dynamically select from any destination in the building from a pick list, or choose to send some of the load to a first destination and the remainder of the load to a second destination. For example, starting in production, one tote can be sent directly to an assembly area for just-in-time materials delivery while the second tote can be sent to the AS/RS to be placed into inventory. Once tasked, the ADAM i-AGV will autonomously navigate and deliver the products to the destination in the selected sequence. En route, the ADAM i-AGV will also monitor the state of its battery charge and, if time permits, automatically stop at one of the opportunity charging stations for a rapid top- up (30 to 45 seconds) of the battery charge.

Before the implementation of the ADAM system, the only handling solution capable of accomplishing such a complicated task was manual labor. Not only has the ADAM i-AGV system accomplished the basic goal of autonomously and reliably transporting materials from point A to point B, but has also amplified the benefit of automation by enabling Otis to create a truly Lean manufacturing environment saving 94.2 labor hours per day.

“By marrying ADAM with other Lean strategies, we have improved on-time deliveries, going from a success rate of 85%, to 99.92%,” said Larry Williams. “We have better visibility into the management of our inventory, resulting in a savings of over $2 million dollars.”

In a similar manner, the adaptability and elasticity of the ADAM system has given Otis the inherent ability to run production the way they want, not the way the material handling equipment dictates. Today, this quintessentially American company embraces continuous improvement and innovation to maintain its competitive advantage needed to keep their sustainable growth mission on task.

To extend the flexibility of robotics beyond a fixed workspace, RMT Robotics also manufacturers and integrates ADAM™, the category-defining intelligent mobile robot. The ADAM system redefines the purpose and function of industrial AGVs by performing intelligent robotic transport of materials in complex, random origin to random destination industrial environments.

Since 1981, RMT Robotics has been recognized around the globe as an innovator in robotics materials handling. RMT helps our customers compete in an increasingly aggressive and price-sensitive global marketplace by providing best-in-class robotic handling solutions.