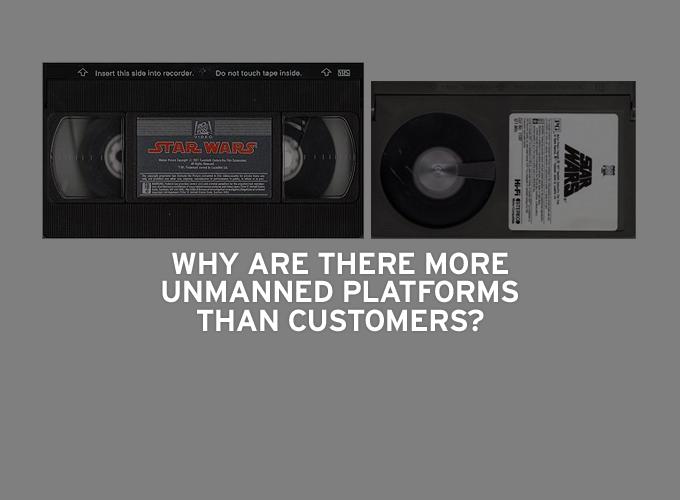 These questions were raised in the Unmanned Systems group in LinkedIn. It provoked a number of insightful comments about the current state of unmanned systems and its future. If you are a member of LinkedIn, and can log in, you can read the discussion here.

Due to the privacy policy of LinkedIn, I can’t name the participants here or quote verbatim, but I can certainly give you the gist of the topic, which has been broached numerous times in conversations within the industry.

Based on the LinkedIn discussion and my own reading, I would say that most theories fall into the following categories:

Below I give a very brief description for each theory as well as my opinion of them. Since this involves a series of complex topics, my discussion will necessarily be superficial.

Military applications are inappropriate and too expensive for civilian use.

One line of reasoning declares that we lack standardized offerings because no one is sure exactly what the markets want. The unmanned system industry came of age in the battlefields of Iraq and Afghanistan, and hasn’t yet adapted to civilian realties.

Large UAVs, the most famous members of the unmanned system world, are sometimes cited as an example of inappropriate platforms for the domestic market. The effectiveness of large UAVs in taking out terrorists and gathering intelligence (ISR) has been highly publicized. What is less well-know is their cost.

In my blog post about Optionally Piloted Vehicles (OPV), I note that it takes 109 people to support a UAV for a single in-theater Combat Air Patrol. Aviation Week reports that some manned light aircraft are actually more economical than their unmanned counterparts.

Indeed, as a cost-cutting measure, the Air Force is actually reducing the number of Reapers and Predators it buys.

Oh yeah, and they crash a lot. Easy to see why even the most technologically obsessed, gung-ho police department may hesitate to invest money on the time, infrastructure, and personnel it takes to field a large UAV.

One problem with this line of reasoning is that large UAVs have been bought for domestic use. The Customs and Border Protection agency has acquired eight Predators and plans to buy more. Of course, this agency is unusually well-funded due to the high-profile issue of border security, and must be regarded as an exception.

A more significant flaw with this way of thinking is that there are a lot of other unmanned platforms than large UAVs. For the most part, UGVs, SUGVs, UUVs, and TAUVs are cheaper to buy and deploy than large UAVs.

This argument is a variation of the old “search for the killer app” (substitute “disruptive technology” if those are your preferred buzzwords). There is a huge potential for unmanned systems in the commercial market, if only we could figure what would sell.

Unmanned system developers are too romantic.

I don’t hear this argument too often, but it does appear every once in a while.

Some say that robot developers are so in love with their technology, that they ignore the demands of the market. Just because something is technically possible, that doesn’t mean that it is commercially practical. As a result, we have multitudes of beloved, yet impractical unmanned systems, that fly, swim, roll, and ooze through the corridors of tradeshows. Not everything that can be built, should be built.

While I fully appreciate the enthusiasm that engineers display for their toys, I equally understand the very real love that entrepreneurs have for money. I just don’t believe that the businesses that support unmanned systems are so blinded by their fascination with technology, that they forget the bottom line.

The market is stupid.

I see this often. The industry is making all sorts of useful unmanned systems, but the market isn’t buying them, because they are distracted by petty issues such as legal liability and don’t understand their true capabilities. We need to educate them, goes this argument, so their idea of unmanned systems aren’t based on movies.

Another way of stating this is that we need to be Steve Jobs, not Thomas Edison. Thomas Edison never made a product in which he didn’t beforehand carefully consider its commercial potential. Steve Jobs, on the other hand, invented products that people didn’t even know they needed (“No one wanted an iPhone before it was invented”).

I feel the Jobs/Edison dichotomy is a false one. Apple has great marketing, but their products didn’t do well, because they “educated” the public. If unmanned systems developers make products that are as fun and as affordable as Apple products, they will also have success.

“The customer is always right” may be a cliché, but it is also true. It’s the responsibility of unmanned system developers to match the needs of the market, not the other way around.

Blaming the government for one’s problems is an oldie, but a goodie. Gather a crowd of unmanned system entrepreneurs and you will hear the following:

The government has a role to play, but it is not the blame for the lack of success of unmanned systems in the consumer market or the bewildering diversity of platforms. Look at what happens when the government actually exercised leadership. The Department of Defense has repeatedly made interoperability a priority for years, but too many developers have ignored this capability in their proprietary platforms.

The industry needs to take responsibility for this lack of standardization. Remember, the Joint Architecture for Unmanned Systems (JAUS) was originally based on interoperability efforts developed by the automobile industry. Business leaders have to step up and learn to cooperate, even with their competitors.

The critics are correct that laws are not keeping up with the pace of technology. A major impediment to the implementation of unmanned agricultural systems is unresolved issues of liability. Many developers are frustrated by the glacial pace of the FAA in approving UAVs for use in civilian air space. However, laws are complex, not so they can provide livelihood to lawyers. Laws are intricate and difficult to change, because human behavior is complicated.

I began this article with a reference to a discussion in LinkedIn. One commenter in this discussion wondered how the “RF” (radio frequency) was going to be managed in a world populated by unmanned systems. The ubiquity of IED jammers as well as intense ISR efforts has made this a problem in current theaters.

Imagine every single vehicle - air, land, and sea - in the United States using the broadband to manage senor information as well as for remote piloting. How will the RF be regulated? Would the same rules for sparely populated, flat Nebraska apply to the crowded, artificial canyons of New York City? What about a semi-autonomous UGV that was used on a convoy from Nebraska to New York City? What bureaucracy would regulate the RF of all the sensors and mapping it used? How would Federal regulations balance out local needs? What about the Gordian Knot of liability? No matter how efficient a government is, these are not the sort of regulations that can be churned out in a weekend.

Forget the platforms. Focus on sensors.

I am beginning to hear this more often. In the LinkedIn discussion one commenter mentioned the prominence of sensor companies for underwater unmanned systems.

Like all the issues mentioned here, this one is too complex to do it true justice. Simply put, the diversity of unmanned systems is good. Abandon the ideal of a generic platform and build them to sensors and payloads. Look at the application first. Form follows function.

I feel this argument has a grain of truth. The most successful unmanned system in the domestic market is the Roomba, a simple affordable machine dedicated to a single purpose.

Obviously, a proliferation of single-application unmanned systems, each with their own proprietary technology, would create huge problems for interoperability, training, maintenance, and other logistical issues.

AMREL has faced similar issues with rugged mobile computing systems. We developed Flexpedient® Technology, which enables the construction of field-expedient interoperable OCU solutions. Expanding on our experience with Flexpedient, we are now focusing on creating unmanned subsystems that are:

One example is our new one-box integrated computer and management switch. Onboard computing capability reduces need for manual configuration as well as eases additions of sensors and autonomous capabilities modules. It enables the development of platformindependent payload solutions, which can be transferred between SUGVs, UUVs, or TAUVs. We will be discussing this and similar solutions at the upcoming 2012 Ground Robotics Capabilities Conference.

This approach attempts to “future-proof” unmanned system offerings. We don’t know if the future will consist of many diversified platforms, or just a few generic ones that survive a Darwinian competition in the marketplace. By fielding subsystems that are low-footprint, flexible, modular, and potentially platform independent, developers will give their unmanned offerings a better chance to endure.