We are in the early stages of unmanned systems being used on the battlefield. While robots are being used in a growing number of missions, work continues on the research side to integrate new systems and capabilities to continually expand their value on the frontlines. 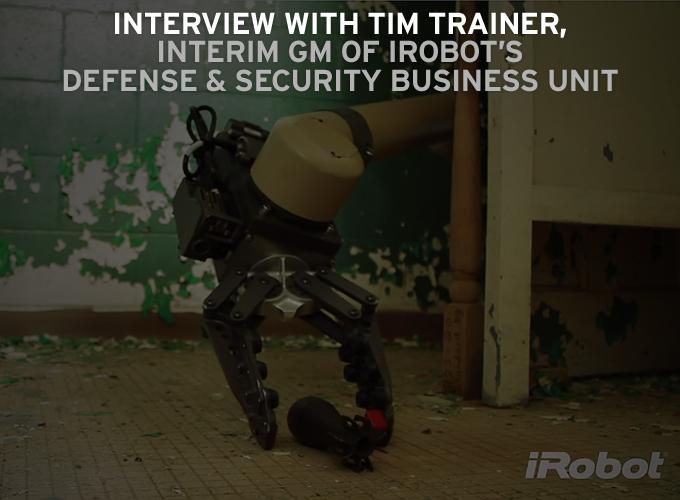 iRobot creates robots on the mantra of keeping people out of harm’s way. How is iRobot adapting with the times particularly as IEDs and missions keep changing?

Based on the successful use of robots over the past 10 years, they are being used in a growing number of mission-types. Robots have moved beyond the explosive ordnance disposal mission and are now being used by infantry, engineer and special operations forces. To address evolving needs, iRobot is developing next-generation technologies relating to autonomy and multi-mission platforms.

We recently introduced the iRobot 110 FirstLook and iRobot 710 Warrior. FirstLook is a five-pound, throwable robot that is ideal for special operations and infantry missions. The robot is small enough to be carried in a soldier’s pocket and can withstand being dropped from heights of up to 15 feet. Warrior is ideal for heavy-lift EOD operations in tough terrain. It has also been in operation at the Fukushima nuclear power plant for the past year, along with our PackBot platform, where it has been used to detect radiation levels and assist with debris removal.

How do you foresee the military successfully establishing an integrated manned/unmanned force on our frontline? How long do you think it will take to make that happen?

This will be an evolutionary and iterative, vice revolutionary transition.  We have seen this with the force-wide adoption of robots by EOD forces, and we are now seeing it with infantry and special operations.  Full integration will come in steps with the fielding of greater levels of autonomy, increased capabilities and system reliability.  Ultimately, the integrated force will be built on the manned forces’ acceptance and trust of their unmanned systems.  As unmanned system capability and reliability grow, they will find greater adoption and integration with manned forces.  We are in the early stages of unmanned systems being used on the battlefield. While robots are being used in a growing number of missions, work continues on the research side to integrate new systems and capabilities to continually expand their value on the frontlines.

There’s been talk of further investments being placed in new war-fighter technologies, like robots. In a time of budget crunch, do you think this vision is attainable? Why? How?

While there is short-term budget uncertainty, the overall demand for our products and technologies in the military remains robust. There has been an expressed need for next-generation technologies based in part on the success that robots have had on the battlefield. We feel they are well positioned to be a part of the military of the future.  Both the President and the Secretary Panetta have identified unmanned systems as a priority in future defense spending.

Do you envision a day where man and robot fight side by side on our frontlines?

What you will see are more robots being used for more missions in order to keep soldiers out of dangerous and potentially deadly situations. You will also see more autonomous features so that robots will be easier to operate and so that one operator can control multiple robots.

iRobot recently announced that it received its 100th U.S. patent, which is based around autonomous features. Can you tell us about your efforts with regard to autonomy and where you autonomy heading?

Based on user feedback, iRobot developed the User Assist Package (UAP). UAP improves situational awareness, keeps the operator safer and speeds up operations. The UAP adds some important semi-autonomous capabilities to the iRobot 510 PackBot including retro-traverse (if a robot loses communications, it will automatically re-trace its path to the point where it last received communications), self-righting (if a robot turns over, it will automatically right itself) and heading hold (a robot maintains its heading by adjusting its path through debris and other bumps).  Additionally, UAP provides mapping capability, allowing the operator to more easily and effectively maneuver the robot and clear suspected areas.

Can you tell us a little more about some of the research and development efforts you have going on at iRobot?

In addition to keeping focus on present-day development efforts, we are also looking toward the future. Advanced platforms and robotics technologies can transform the ways robots move through the world and interact with their environment. For example, human-robot interaction is a broad area of study that covers multiple robot command, control and direct interaction with robots through gesture and speech. Collaborative systems is another area of research. This enables ground, air and underwater robots to work effectively in teams. And more advanced semi-autonomous operations enable robots to perform tasks with limited human supervision.

Last year, iRobot sent two robots to Fukushima to help post-disaster. How did that come about, and is iRobot looking to expand their military robots into non-military roles?

The decision was made to send the robots and personnel one week after the earthquake and tsunami. iRobot is here to build robots that make a difference, and we offer our assistance in times of need. We have pursued non-military areas for these robots to be used as well, including security and industrial applications. Recently, Progress Energy purchased one 710 Warrior and two 510 PackBots for routine maintenance at Robinson Nuclear Plant in South Carolina.  These robots mitigate risk by keeping personnel out of radioactive environments and serve as a cost-effective way to perform operations.

Other than military and safety roles, where does iRobot see the market for your systems growing the most?

iRobot has also sold more than 7.5 million home robots worldwide, with the Roomba vacuum cleaning robot leading the charge. We are also looking at additional markets that can benefit from robotic technologies. The iRobot Ava mobile robotics platform is suited to markets such as healthcare and retail. iRobot will continue to develop robots that fall under the same categories as always: creating practical robots that make a difference in people’s lives.

iRobot was founded in 1990 when Massachusetts Institute of Technology roboticists Colin Angle and Helen Greiner teamed up with their professor Dr. Rodney Brooks with the vision of making practical robots a reality.

In 2008 iRobot generated more than $307 million in revenue and employed more than 400 of the robot industry’s top professionals, including mechanical, electrical and software engineers and related support staff.