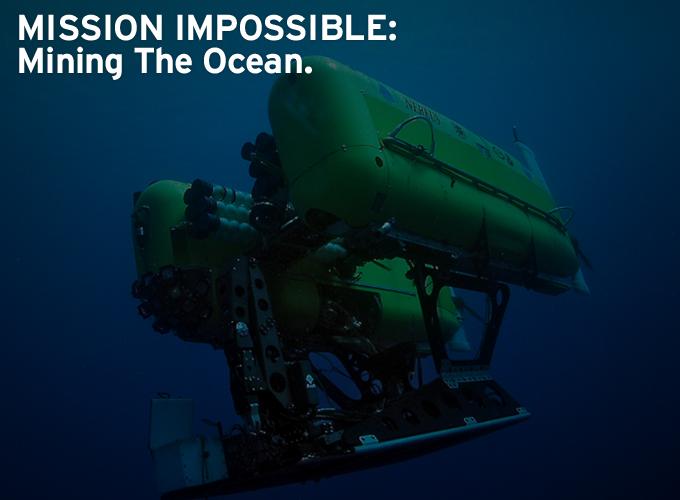 One of the great ocean disasters has baffled scientists and engineers for 100 years, the sinking of the unsinkable Titanic. Interest in the wreck has increased thanks to underwater robots. Two independent self-controlled underwater robot vehicles, known as autonomous underwater vehicles, or AUVs, scouted the ocean floor, day and night, snapping high resolution photographs to determine exactly where each part of this massive ship finally rested, under 13,000 feet of water. Using 100,000 photos, engineers hope to shed some light on how the ship broke apart and whether or not there was a fatal flaw in the ship's design. 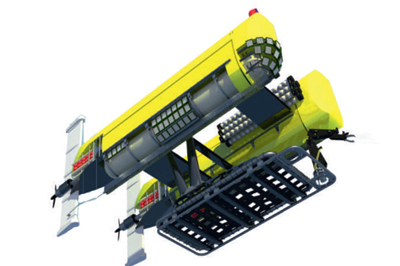 The research team used acoustic imaging, sonar technology and optical, video and 3D imaging to chart the wreck site. The scientists and engineers will examine the wreck site in virtual space to unearth more information of the Titanic’s sinking. Photos taken by the AUVs already prove that the ship's stern rotated like a helicopter blade as it sank, rather than plunging straight down. AUVs make it possible to reconstruct the death of the Titanic before the wreckage completely disappears as it is being eaten by rust feeding bacteria.

The AUVs work on rechargeable lithium-ion batteries, similar to those used in cell phones and laptop computers. The battery life is around 20 hours and it takes six hours to recharge. Commands to the AUVs and return information are transmitted via a light, flexible fibre optic cable. Using computer program systems designed for flying drones, scientists can control the AUV’s from hundreds of miles away as they carry out forensic activities, along with mapping the sea floor.

AUVs have become increasingly important to ocean exploration. AUVs fall into one of two groups: propeller-driven vehicles that can travel fast and carry lots of instruments, but are limited to expeditions of just a few days; and gliders, which can stay at sea for weeks at a time, but are slow. A new long-range AUV has been developed that can travel rapidly for hundreds of miles, drift in the water for weeks at a time, and carry a wide variety of instruments. 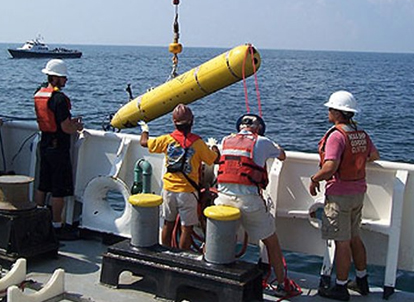 In oil spill research, the TETHYS can efficiently track plumes in a water column to define their shape, and to indentify the individual chemicals within a plume. The data can be used to study how oil degrades over time, its distance from the source and how much is degraded by microbes. Addressing such questions can help scientists understand the range of processes that may act on oil in the ocean, such as, how much of the oil is being eaten by microbes. Understanding microbes' ability to break down oil, and the role that specific nutrients play, could determine how long the oil will remain in the environment. This research would not be possible without the underwater robots (AUVs). 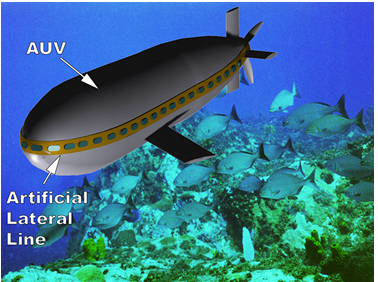 The Robofish, which is roughly the size of a 10-pound salmon, looks a bit like a fish because it uses fins rather than propellers. The fins make it more maneuverable and it has a lower drag than propeller-driven AUVs. What's different with the Robofish is that the robotic fish can communicate wirelessly underwater with other AUVs.

Communications between AUV’s underwater has been a problem. Normally, AUV’s had to surface to send communications. Now, these robots do not have to surface until their assigned task is completed. Ocean-going robots could cooperatively track moving targets underwater, such as groups of whales, spreading pollution, or explore underneath ice, and enter dangerous locations where surfacing might not be feasible. Schools of robots would be able to work together to do things that one AUV could not do alone, such as tracking large schools of fish or mapping expanses of toxic waste that can grow and change shape.

Exploration of mineral resources on the ocean floor calls for AUVs, which are controlled from the surface. A lot of work is being done to map the ocean floor, but accurate maps of underwater terrain do not exist. It is impractical to have mining workers at considerable depths, so AUVs designed to withstand high water pressure must be utilized, which are capable of performing their tasks, by being controlled remotely via teleoperation or capable of a certain degree of autonomy. Limited camera views, harsh lighting conditions, limited communication bandwidth, and significant cost of operator errors require highly skilled and trained teleoperators. Operating underwater craft and machinery remotely from the surface to depths of several thousand feet can be as much of a challenge as working in outer space. 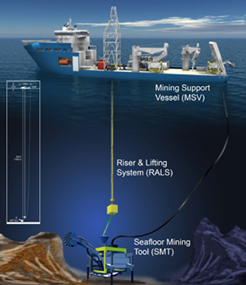 The Canadian firm, Nautilus Minerals is mining copper off of Papua New Guinea, using a dedicated ship, a mile-long riser pipe, and a tethered robot that will strip mine the seafloor under remote control. The oil industry uses similar robots to dig trenches for pipelines. The undersea robot will be the size of a two-story house, a house that will be able to walk on four legs across the rough volcanic terrain until it has smoothed that terrain into a series of flat steps, as in strip mines on land. At that point the legs will retract and the mining robot will move about on more efficient tank treads. A large, drum-shaped cutting tool at the end of a long boom will be able to cut up to 6,000 tons of sulfide rock a day from the seafloor, chopping it into nuggets of an inch or less. Sonar on the machine will allow the operator to position it to within an inch; sonar is essential because video cameras will not be able to see through the thick cloud of mud and pulverized rock the robot will be kicking up. There are at least 2.2 million metric tons of ore to be recovered.

Besides the copper, Nautilus expects to mine 28 million ounces of gold and 528 million ounces of silver in less than one square mile. Deposits left over from “black smokers,” or chimney-shaped structures formed after underground magma pushes mineral-laden fluids through cracks in the sea floor is what the AUVs will mine. As the heated liquid comes into contact with cold salt water, the liquid minerals fuse into deposits of gold, silver, copper and other metallic elements. 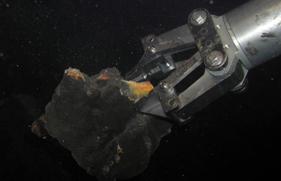 For sites that need closer scrutiny, Nautilus will send down a more-powerful remotely operated vehicle, or ROV, which is connected to the ship by a cable and includes cameras and “hands” that can be manipulated by the team on the ship to pick up and move rocks. The ROV can even drill into the sea floor to collect samples. When particularly appealing samples are found, the substance is placed in a container and sent to the surface to be evaluated.

Many intricate operations are used in oil exploration and drilling where inattention could result in disaster. To reduce the danger to platform workers, the oil industry has been developing robotic seafloor drilling equipment. Such equipment can also reduce the numbers of highly trained technicians needed to supervise operations. 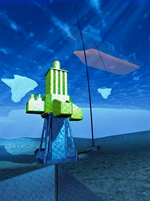 These robotic rigs are unlike anything before. The design allows the rig to be operated on the ocean floor, uninhabited, enabling safer exploration of ultra-deep water regions that are difficult to access with traditional oil rigs.

The software to control these rigs was originally developed for NASA and the National Science Foundation for controlling complex robotic systems. With an automated rig, workers are kept from harm, with less human error, as robots do not get tired and make mistakes.

A floating production-storage and offloading vessel is connected to the production equipment on the seabed. The crude oil is carried to the surface insulated from the cold and pressure of the ocean depths. Remote controlled robots guided from the surface are used to perform tasks to within three feet.