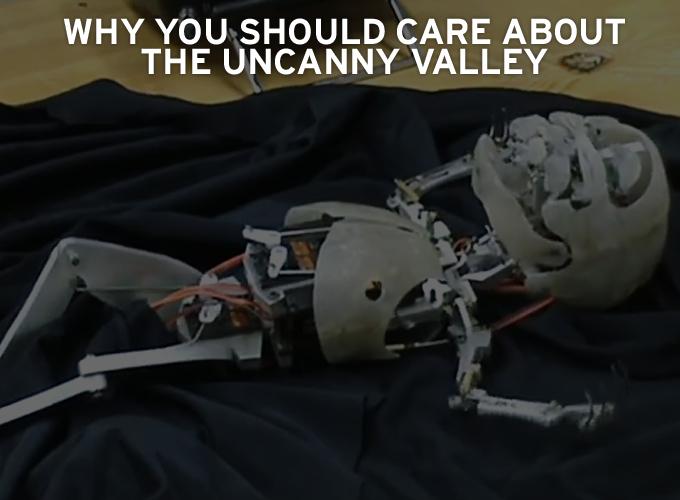 05/31/12, 10:19 AM | Industrial Robotics | Opinions and Advice
I am going to make a number of assumptions about a certain group of roboticists. They:
If the above describes you, guess what?  You are wrong; the “Uncanny Valley” may impact your work, and sooner than you think.

What is the “Uncanny Valley”?

In a 1970’s paper, roboticist Masahiro Mori noted that people are disturbed by robots that appear “almost” human.  However, they did not react negatively toward robots that display no human characteristics or robots that mimic humans exactly.
Between the two extremes of perfectly human and completely non- human lies an “Uncanny Valley” that elicits feelings of disgust.  Using a scale of “familiarity” to describe levels of revulsion, and an axis of “human likeness” to describe degrees of anthropomorphism, Mori visualized this “valley” in the following graph: 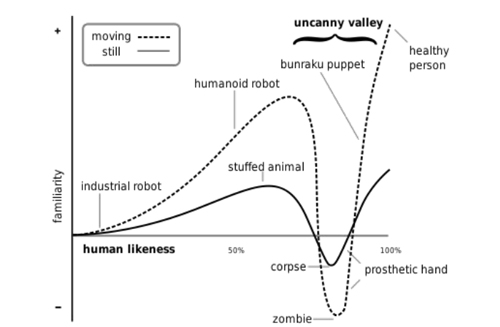 Mori’s idea hit a nerve.  Virtually, everyone has watched a robot video, and said, “Boy that’s creepy.”  In fact, the concept has become sufficiently popular, that The Atlantic, a literary/cultural magazine, used Uncanny Valley in a headline for an article about Mitt Romney’s unpopularity ( in the interest of political balance, I suppose the same headline could have been used in an article about the famously stiff Al Gore).
Here are examples of videos of robots that reputedly elicit disturbing feelings:

You may not be building humanoid robots now, but you may be soon

As the ground wars in Asia wind down, many robot developers are changing their focus to the civilian market.  Following the time-tested model of military technology diffusing to law enforcement markets, roboticists are looking to develop domestic security and related applications.
However, the “killer app” for the civilian market may have nothing to do with security.   Robots are being developed for applications that stress social and emotional interactions with humans.  In Europe, the USA and Japan, researchers are looking to robots to assist in physical rehabilitation for stroke victims, act as a receptionist, assist the elderly, help the mentally ill, and a wide variety of other tasks.  These applications have a bewildering variety of names including Mobile, Dexterous, Social Robots (MDS); Social robots; Carebots; Relationship technology; and my personal favorite, Welfare technology.
You may think that the effector arms that you developed for IED detection in Iraq will be used for bomb disposal by police. However, it is just as likely they’re going to be helping someone’s grandmother out of a bathtub. Awareness of the Uncanny Valley phenomenon will ensure that the effector arm’s appearance doesn’t freak out Grammy.
Of course, not all social robots resemble humans, but many of them do. Personally, I do not see the need for anthropomorphized robots to do tasks that involve human interactions.  Ugly, impersonal ATMs are just fine with me. However, the current trend definitely favors robots with faces.

No matter how good technology gets, nature does some things better.  Robot developers are increasingly using biomimetic technology. For example, Lockheed Martin’s asymmetrical Samurai UAV elegantly imitates the aerodynamics of a falling maple seed.
Another good example is Boston Dynamics Big Dog, which replicates the movement of quadrupeds. I have shown videos of Big Dog to a number of friends, and many definitely display the classic Uncanny Valley reaction, i.e. “Ooh that’s gross!”   This shouldn’t be too great a surprise.  You will note on Mori’s graph that “stuffed animal” can fall into the Valley.
If you’re developing a robot based on biological models, you better consider the effect of Human Robot interactions (HRI).  Of course, this leads to the whole question of what exactly causes the Uncanny Valley.  While there are a lot of theories, there isn’t a lot of evidence.  Wikipedia has a pretty good summary of the leading ideas.

You should care because the military does

Take a look at Nexi, a “facial expression robot.” In this image, it looks sort of cute, but it definitely has a reputation for giving people the creeps.
Guess who funded it?  “This project is funded in part by an ONR DURIP Award Mobile, Dexterous, Social Robots to Support Complex Human-Robot Teamwork in Uncertain Environments” (Personal Robots Group).  If you are among the acronym challenged, ONR DURIP is the Office of Naval Research Defense University Research Instrumentation Program.
The military is in interested in social robots for all the other reasons that other people are: rehabilitation, education, and training. However, according to a video on the Pentagon Channel, Nexi is designed for dangerous missions, such as IED detection and Sensitive Site Exploitation.   That’s right, the ONR is looking at Nexi as a next generation PackBot.
With the explosion of unmanned systems, the military has increased concerns about how well humans and robots work together. As I wrote above, I am skeptical of the need of a humanoid robot for social tasks, but I confess that a robot with facial expressions sort of makes sense in a battlefield context.  A major barrier to autonomy is trust.  Human operators sometimes interfere with autonomous robots successfully completing their tasks, because they don’t understand its actions and can’t decipher its motivations (see Autonomy, Situational Awareness, and the User Interface — Part 2).  An expressive robot will be able to communicate its intention to its human teammates.  Just as we have military standards (MIL-STD) for Electro Magnetic interference, we may one day have them for limiting the Uncanny Valley phenomenon. It may become a common specification in future robotic Request For Proposals (RFP).

Not everyone is convinced that we should care about the Uncanny Valley phenomenon.  A Popular Mechanics article lays out convincing arguments against its existence, or at least our understanding of it.  Several roboticists are quoted stating that they had never seen people react negatively to “almost” human robots.  Mori, himself, never presented data supporting his ideas.
As I noted above, this idea gained traction because almost everyone has seen a robot video that has repulsed them. It’s possible that the Uncanny Valley phenomenon occurs mostly in response to images on videos and animations.
The Popular Mechanics article reports that videos of KOBIAN and CB2 have inspired comments of revulsion, but almost no one who meets these robots experiences these feelings.  The author of the article describes viewing the video of Nexi as “overtly unnerving,” but also states that he was completely comfortable in the presence of the robot itself.
The reaction to the motion-capture, computer-animated Polar Express movie is revealing. While most people were generally favorable, other said that the animated characters looked like “zombies” who gave them the “creeps.”  One reviewer even complained of nightmares.
It is easy to see how this could impact certain applications.  Suppose the ARMY wanted an immersive CGI experience for training soldiers to perform house-to-house searches.  The training would hardly be effective if the soldiers were distracted by the fact that the civilians looked like zombies (unless, of course, they were being trained to search the houses of zombies, but that’s a topic for another article).
It is beyond my expertise to determine under what circumstances The Uncanny Valley   phenomenon occurs.  While the Popular Mechanics article demonstrates that our understanding of it is primitive at best, enough anecdotal evidence exists to warrant that it should be taken seriously.
As the demand for human-like robots grows, the Uncanny Valley phenomenon will impact robot manufacturers and developers more and more. With populations aging in countries as diverse as China and the United Sates, roboticists will increasingly focus on social robots.  They will ignore the Uncanny Valley at their own risk.