The oceans are unfathomable, dark and dangerous; yet researchers are building undersea robots that can find their way in the mysterious deep. Scientists now have a variety of research and work vehicles to explore where no man has gone before. 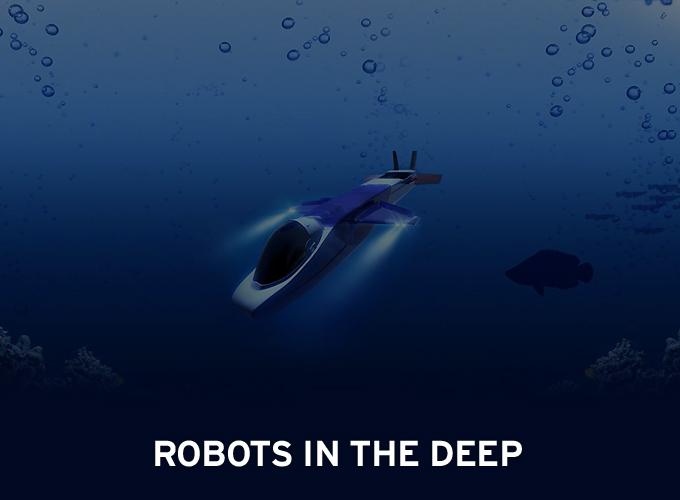 Basically there are two types of robots used for deep sea exploration.  These are: Remote operated vehicles (ROV) and autonomous underwater vehicles (AUV), both of which move through the sea utilizing various means of propulsion.

Underwater Remote Operated Vehicles are robots that are tethered to a surface vessel with a cable that transmits information and power to the ROV.  ROVs can vary in dimensions from that of a bread box to the size of a large van. ROVs can execute functions that can range from carrying a camera to monitor subsea environments to accommodating multiple arms to perform work under the sea.

There are several versions of the ROV.  The smallest version just carries a camera for observation, and this variety of ROV is limited to relatively shallow waters of 1,000 feet or less. The next version does the same basic function of observation, but can descend as deep as 20,000 feet.  A work ROV is capable of deep sea functions, such as manipulation and grabbing. The work ROV is deployed in drilling and construction support, as well as pipeline inspection.  A heavy work ROV can operate at depths of 10,000 feet and have lift capability of over 11,000 pounds with multiple manipulators and grabbers capable of performing deepwater installations. 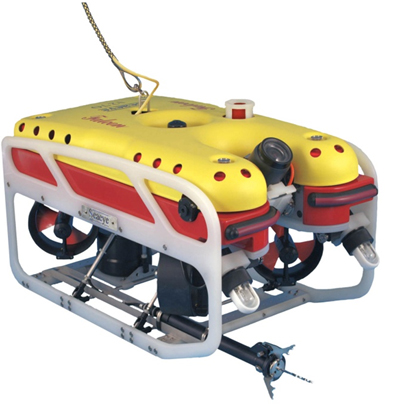 ROVs, such as the Saab Seaeye, are used by the oil and gas industries, security companies, and researchers for salvage and dive support, inspections, environmental work, deep tunnel penetration and survey operations. With a lifting umbilical winch and deployment cage system, the Seaeye can dive to 3,300 feet.  In addition to deep vertical dives, it is able to perform long distance pipeline inspections such as hydroelectric penstocks and aqueducts out to 10,000 feet.

The umbilical cord is fiber optic, controlling a CCD camera, a three-jaw grabber, sonar and a video recorder. It uses instant camera feedback so that location information can be sent back to the operation area for recording and adjustments.

ROVs usually float before they sink, using ballast.  Then a downward pressure force is used to sink the ROV, which is moved by motors placed on the horizontal axis. This type of ROV moves just above the seabed. To maneuver on the seabed, the ROV needs to be a crawler.

ROV crawlers are ideal for offshore mining, as they move along the ocean floor attached by a wire rope and umbilical cord that provides power and remote control. The operator is provided with animated images of the movement of the crawler across the ocean floor. The crawler sucks up the seabed material and pumps it to the surface, while the operator controls the size of the material with a nozzle filter and the speed at which the pump works. 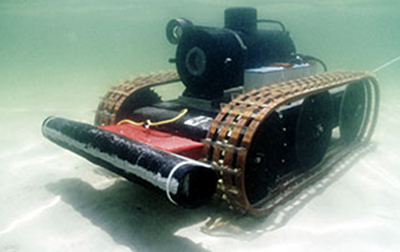 Photo courtesy of Benthos and the Naval Coastal Systems Station.

The more advanced undersea robots are the AUVs, which are programmed to find their own way along the ocean floor, while the ROVs are actually tethered to a vessel and controlled by an operator. AUVs find their way by the use of compasses, sonar and video.

AUVs are programmable, robotic vehicles that can drift, drive, or glide through the ocean without real-time control by human operators. Some AUVs communicate with operators periodically or continuously through satellite signals or underwater acoustic beacons to permit some level of control. 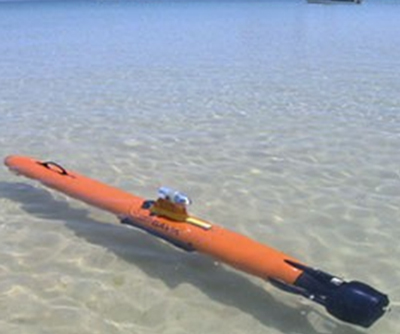 ROVs have no power limitation because power is supplied continuously from the surface.  AUVs must be streamlined in shape because their goal is to go faster even with power limitations.  Therefore, their shape must be efficient to move easily with minimum energy output.

Communications with a ROV is done through its tether, but there are times when researchers need to send and receive underwater information from AUVs, which do not have tethers.  For this, oceanographers use acoustics to communicate with the AUV, allowing them to collect data in real time. Researchers are developing networking solutions for wireless sensor networks. Although there exists many recently developed network protocols for wireless sensor networks, the distinctive characteristics of the underwater acoustic communication channel require very competent and reliable data communication protocols.

At present AUVs cannot do the heavy work that the ROVs can perform, but in the future, AUVs will have the potential to inspect, as an AUV, but convert to an ROV at the job location.

AUV development needs to improve the operation range and time. To achieve this requirement, sufficient energy to propel and operate the AUV has to be considered. Researchers have to develop the optimum design for a propeller that has low energy consumption but high thrust. In reality, propeller driven AUVs can only cover a relatively short range after each battery recharge due to the high power consumption of the propulsion system. The range of AUVs is restricted by the battery and is generally limited to several hundred miles. 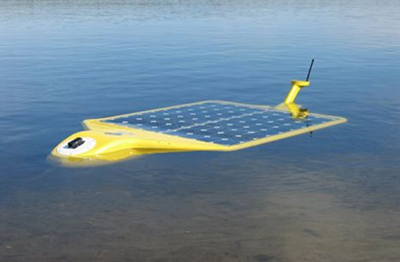 The SAUV is designed to dwell on the surface while recharging its batteries; and then it executes its programmed mission. While on the surface, the SAUV is designed to communicate via Iridium satellite, or a RF communications link, to upload collected data and to allow reprogramming of operation profiles. A bi-directional acoustic link affords for data acquisition from sub-sea instrumentation

The underwater glider, which is a type of AUV, has many advantages, such as long endurance, little noise and low energy costs. A glider can change its buoyancy by a hydraulic pump, and utilize the lift from its wings to generate forward motion. This type of AUV uses changes in vehicle buoyancy to compel vertical motion. A pair of fixed wings provides forward momentum to move horizontally through the water. While the major space within the glider is reserved for mechanics, battery storage and communication electronics, there is a section devoted to a scientific payload. 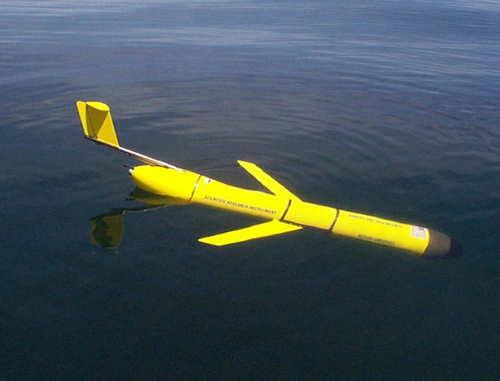 Gliders, using buoyancy-based propulsion, show a significant increase in range and duration compared to AUVs propelled by electric motor driven propellers, extending ocean tasks from hours to months; plus they can cover thousands of miles.

Robots, which move like fish, are quieter, have more maneuverability and are more energy efficient. European scientists have developed such a robot “fish.” This robotic fish is about five feet in length and can travel for about eight hours. It has sensor-laden fins, which allow it to swim just like a real fish. It can transmit readings up to two miles away from the station. 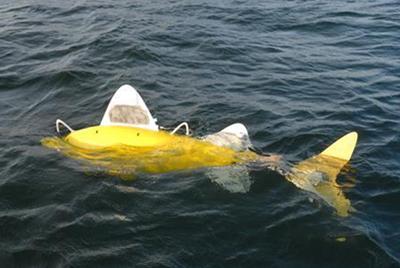 Chemical sensors fitted to the fish permit real-time, in-place analysis, rather than the current method of sample collection, which has to be dispatched to a shore based laboratory. This robotic fish can be sent into contaminated waters, which effectively reduces the time to detect pollutants from weeks to seconds. It can also pick up the pollutants coming out of ships and/or undersea pipes. The fish, when used in multiples, are able to communicate with each other, determine obstacles and avoid them.

There is a need for each type of undersea robot. The ROV is great at handling heavy chores without worrying about power while under the direct control of an operator. The AUV can travel immense distances without tethered control and is ideal for observation and recording.

The effectiveness of AUVs is in direct proportion to the propulsion system used. A straight propeller drive is the least effective because of the power consumption, but will work well for short missions. Gliders travel greater distances with much less power usage. As we all know, nothing works better in the ocean than a fish; therefore the “fish” robots can move faster and relay information to the operator quicker than any of the other robots.