ADAM AMRs mimic human behavior. In a textbook example of lean manufacturing, ADAM is designed to predictably and instantaneously react to the electronic request of the machines for service, delivering what the production cell wants in the exact time and quantity it wants, connecting islands of automation for optimal efficiency. 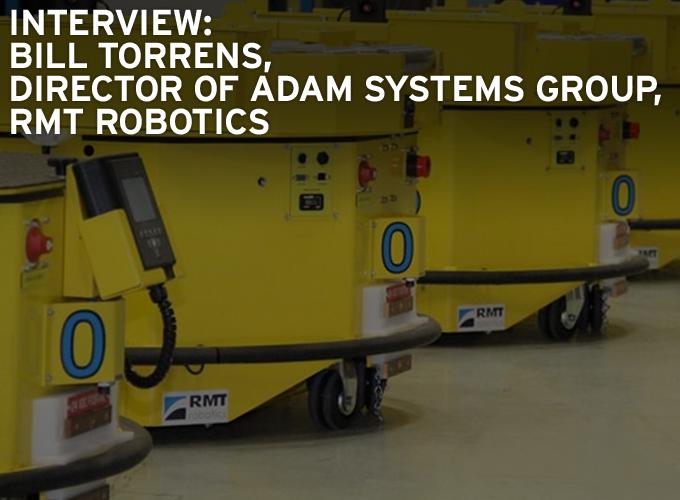 As we read about widespread adoption of robotics in materials handling, why in 2012 do we still see the manual movement of materials on the manufacturing floor?

When asked why manual labor is still used in material handling processes, the common response from manufacturers is that their process is too dynamic to use AGVs (automated guided vehicles) or traditional automation, so they have given up on automating transport processes. However, the full benefits of mechanization and lean operations are only realized when the automation loop has been closed and the islands of automation are robotically connected.

AGVs have been around since the 1950s so why aren't they more prevalent?  Why won't AGVs fit the bill?

What is AMR technology and how does it differ from AGVs?

By definition, AMRs (autonomous mobile robots) promote lean manufacturing efficiency. The key distinction that defines AMRs is that all of the following four features are managed on the vehicular level:

How does AMR technology solve the inherent problems of AGVs?

AMR technology is not artificial intelligence (AI); but, it is approaching AI in that it is able to independently adapt its behavior based on real-time inputs. That adaptation is as close to mimicking human behavior as possible. AMRs have no script or program; they are constantly improvising. For example, AMRs control where and how long they charge based on their given requirements of satiation and the amount of time available. In addition, AMR vehicles autonomously assess their physical location in real time and can, as a result, plan a path from anywhere to any destination in a factory without advice from an external control system.

What are the key benefits of using the ADAM AMR solution? Do the benefits extend beyond labor savings?

ADAM AMRs mimic human behavior. In a textbook example of lean manufacturing, ADAM is designed to predictably and instantaneously react to the electronic request of the machines for service, delivering what the production cell wants in the exact time and quantity it wants, connecting islands of automation for optimal efficiency.

The other side of the lean equation is connecting people to robots. Designed for intelligent human interaction, ADAM AMRs quickly respond to operator "call button" requests, moving work-in-process (WIP) materials on demand between manual work stations at the pace set by the production staff. By delivering what is needed in the quantity and at the time that it is needed, WIP inventory at the cells is reduced and manual labor efficiency is optimized. In essence, the ADAM AMR solution repositions the value of labor and provides a truly lean manufacturing environment, extending its benefits beyond labor savings into actually increasing profit.

Can you describe a typical application for ADAM and how it interfaces with its operator or programmer?

By design, an AMR is capable of performing its basic tasks without interface with an operator or programmer. Most AMRs are mission-based vehicles, which means that the vehicle only requires interface with a centralized controller for dispatch instructions. Once a call is made, a vehicle is identified and dispatched to destination. Since an AMR does not require centralized interface for localization, navigation, path planning, traffic or power management, the vehicle will not interface with the dispatcher until arriving at destination.

In this architectural scenario, machines or work cells are electronically connected to a centralized “dispatch” computer that has an awareness of the status and location of all AMRs in the fleet. Akin to a dispatcher for taxis, calls are answered in sequence and “taxis” are intelligently deployed to answer the call. Unlike conventional AGVs however, any call can be answered by any AMR and the payload passenger can be transported anywhere in the building.

How would a typical customer initiate and implement a new ADAM AMR system in an existing plant?

The implementation of an ADAM AMR system is really quite simple, initially; an operator will manually guide a single ADAM around its working environment to allow it to build a map of walls, fixed equipment, pathways and other areas using its onboard range-sensing laser. Once complete, the map can be enhanced by the operator through the addition of features such as one-way lanes and restricted areas.

Once the map is constructed and saved on the AMR (and shared with other AMRs via Wi-Fi), the vehicle is given a general approximation of its location in the map and through feature identification and distance measurements, autonomously assess its location and localizes itself. Once localized, the vehicle (and its colleagues) can be then be deployed from any random origin to any random destination in the map.

How would a typical customer upgrade the system for future expansions or applications?

Upgrading the system only requires simple modifications to the map and/or adding more ADAMs to the fleet.

If a new or modified area of the facility needs to be added, a single AMR can be walked around the area to scan the features and generate a map of the new area. When complete, the new area scan can be “stitched” together with the existing map then shared with all AMRs.

To expand the capacity of the fleet, AMRs can be added incrementally; as few as one (“1”) vehicle can be added. Once connected to the Wi-Fi network, an AMR can use a shared version of the map and literally be put into service within minutes of arrival at site. Since any AMR can be deployed on any mission and go anywhere in the map, a new AMR will happily join the collective to augment the capacity of the fleet.

Bill Torrens joined RMT Robotics in 1998 as the Director of Sales and Marketing. Since 2005, Bill and his team at RMT have been responsible for the promotion and integration of ADAM (www.adamrobot.com), a category-defining autonomous mobile robot (AMR) breaking new ground for guided vehicles in the materials handling industry. In May 2012, Bill was appointed as Director of ADAM Systems Group. Bolstered from the success of ADAM sales and global expansion, RMT created the ADAM Systems Group with a dedicated  team structure employing engineering, manufacturing, customer care and sales professionals. In his new role, Torrens continues to actively promote the ADAM AMR solution, broadening the sales agents globally while developing the internal teams to accommodate ADAM’s rapid growth. Prior to RMT Robotics, Bill spent 10 years as a regional sales manager at Dematic Corporation where he played a key role in the introduction of robotics to the Dematic North American solution inventory, securing several of the company’s first full-scale robotic system orders. Bill graduated from the mechanical engineering program at Ryerson University in Toronto and is active in the materials handling industry.