Powered exoskeletons have the potential to change battlefield technology forever. Paraplegic patients may leverage new technologies to walk again. Future exoskeletons will better integrate with humans, blurring the line between man and machine. 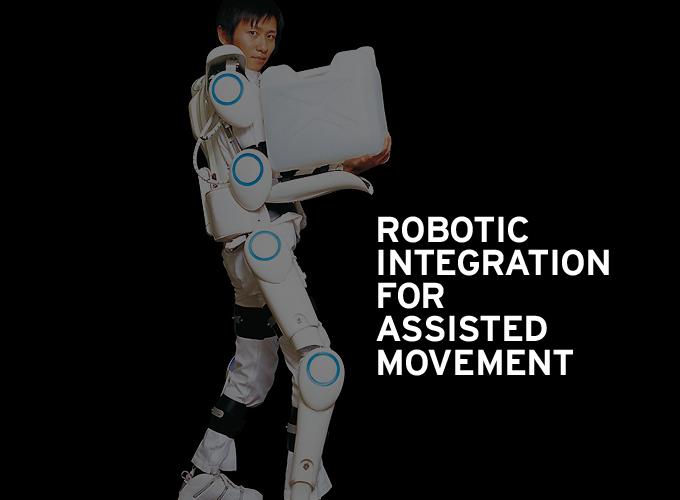 A form of medical exoskeleton, orthosis, is a device which attaches to a limb, or the torso, to support the function or correct the shape of that limb or the spine. There are two types of orthosis; one such is a wearable, portable, lightweight brace that slides onto a patient’s limb. This kind of orthosis gives support to a patient’s limb or back.

The second type is a robotic exoskeleton, which senses the patient's electrical muscle activity through electromyography (EMG), which detects muscle cells' electrical activity when the muscles contract, sending that data to a motor. This exoskeleton allows patients to control their affected limbs. A robotic exoskeleton is very helpful for someone who has suffered a stroke, using the device to regain mobility. When used under the supervision of an occupational or physical therapist, the device can be used to help patients progress from basic motor training, such as lifting boxes or reaching for a light switch, to more complex tasks such as carrying an object or turning a light on and off. 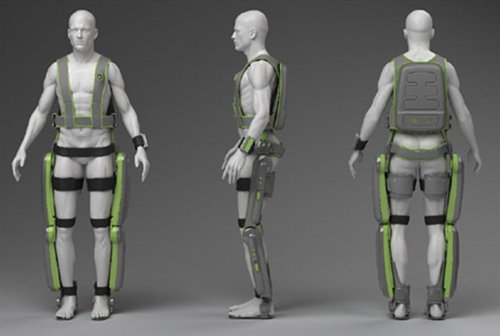 Argo Medical Technologies has developed an exoskeleton, ReWalk, which weighs seven pounds and features two leg braces with motorized joints and motion sensors, a harness, and a backpack for holding the computer that controls movement.

A project that was originally funded by the military, interested in giving soldiers superhuman strength and ability on the battlefield, aided Ekso Bionics in developing the Ekso bionic exoskeleton device, which was so named because it resembles an exoskeleton. 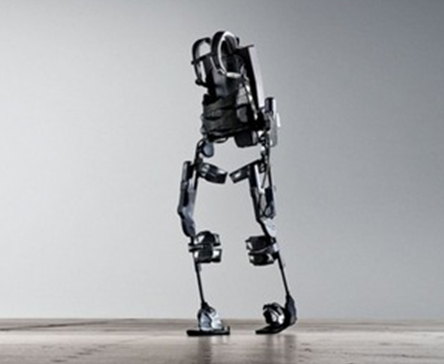 The device helps the wearer walk of their own accord, by picking up small upper body movements and translating them into strides. It enables people with spinal injuries and paralyzed from the waist down to walk again. It has sensors that pretty much mimic the nerves, and sense a person’s movements. These sensors are then translated by a computer that reads the person’s movements and drive forward motors that are sitting under the person’s knees and hips, enabling the person to walk with a reasonably natural gait.

The engineering company, RB3D, developed the Hercule, a robotic exoskeleton that can help users shoulder up to 220 pounds.  Hercule is focused on military, rescue, and medical field use. The suit currently only utilizes reinforcements for the legs, but RB3D is developing a mechanized arm component to aid users in directly lifting heavy objects as well. 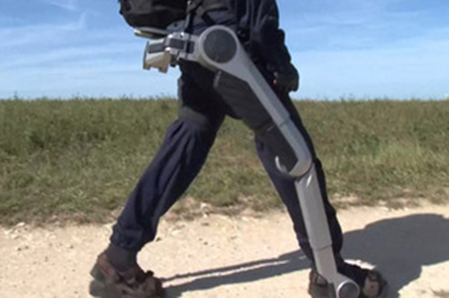 Hercule is driven by the motion of the user wearing the device, while movements by the legs are monitored by the exoskeleton, and the mechanics follow suit. Designed to weigh less than 55 pounds, the battery-powered exoskeleton can travel up to twelve miles with a single charge. 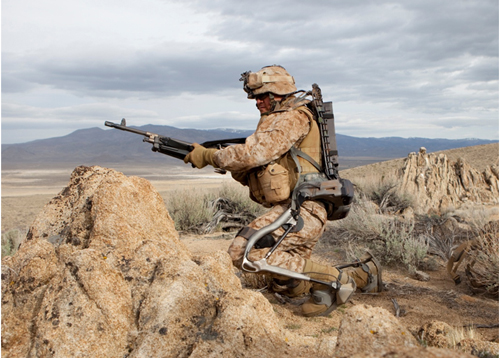 Extended military missions in the field require a lot of gear and all that equipment can weigh up to 120 lbs, carried across rough terrain. Several days of walking can become exhausting, leading to fatigue and lower combat performance. The RB3D system is designed not to impede a soldier’s movement. It allows them to crawl, jump and run.

Lockheed Martin  is developing a similar system which they have dubbed the Human Universal Load Carrier (HULC). Lockheed Martin wants a system that can provide up to 200 pounds of load bearing assistance. The HULC currently runs on batteries, but Lockheed Martin is looking into using more advanced fuel cells to power the exoskeleton that are capable of providing 72 hours of continual use. Like the RB3D system, the HULC is also designed not to impede a soldier’s movement.

The Landwalker exoskeleton from the Japanese manufacturer, Sakakibara-Kikai reminds us of the one used in the movie, Avatar. This exoskeleton stands eleven feet high and weighs 2,204 pounds. If you notice, this robot has guns on each size and would be intimidating to any soldier on the battlefield. 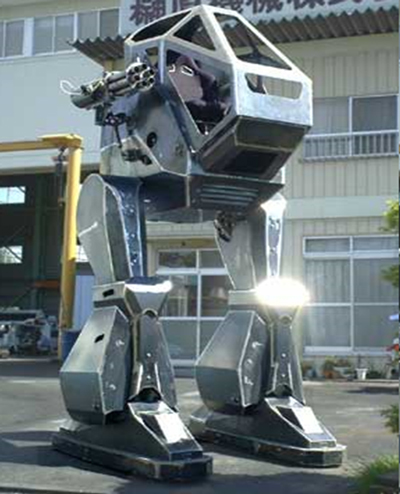 The biggest unknown with using force and motion sensors for control is that it is uncertain how responsive the exoskeleton would be with a human, since there is a certain amount of reacting that is required using force and motion control. That tends to slow down the system and make the exoskeleton less smooth and efficient. Other controls that are available are electromyography sensors and joy sticks, each with their own set of limitations.

Neuroscientists have taken exoskeleton control to the next level with a system that would allow a person to control a super-powered exoskeleton using only thoughts. Scientists already have the technology to create mind-controlled exoskeletons; they just need to develop and refine the technology. We don't need to move a person's limbs to give the person motor feedback; we just have to stimulate their motor cortex. Such an exoskeleton will enable people with spinal cord injuries to achieve mobility by sidestepping their spinal cord as a communications pathway to their lower limbs. Instead of relying on wheelchairs to get around, they will be supported by an exoskeleton especially designed for everyday use. 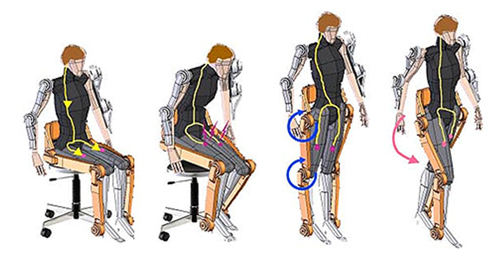 Cyberdyne‘s Robot Suit HAL (Hybrid Assistive Limb) is a ‘cyborg-type’ robot that aims to expand and improve human being’s physical capability. When a person attempts to move, this intention triggers the brain to send nerve signals to the muscles via motor neurons, which in turn, move the body’s musculoskeletal system.

The HAL system detects and interprets the objective, which enables the robotic suit to move in conjunction with the wearer’s desired intention. What makes the HAL system stands out is that it has an alternative movement method known as the robotic autonomous control system where the suit takes charge of the movement. The robotic suit anticipates the movement, referencing its database, and assists the wearer in executing the movement. This makes HAL the perfect equipment for rehabilitation and physiotherapy applications.

A robotic exoskeleton worn over the leg may provide the key to helping stroke patients fully regain their ability to walk.  Physical therapists are considering motorized and non-motorized exoskeletons for gait training of stroke survivors and other motor-impaired patients. There are about 700,000 people, who suffer from strokes each year in the U.S., and as many as 3 million survivors are living with the after-effects.

We see the field of prosthetics improving. If an arm is lost in an accident or in combat, a person could get a prosthetic arm. The exoskeleton may one day be able to replace this prosthetic arm by connecting a robotic arm, which would connect to the neurons in the patient’s brain, allowing that person to control the arm as if it were his/her own.

There is no one size fits all solution for exoskeletons, as there will be a requirement for different types of exoskeletons for different individuals due to their particular abilities and symptoms, such as neurological disabilities, spasticity, stroke, traumatic brain injury, cerebral palsy, and multiple sclerosis.

Powered exoskeletons have the potential to change battlefield technology forever.  Paraplegic patients may leverage new technologies to walk again.  Future exoskeletons will better integrate with humans, blurring the line between man and machine.