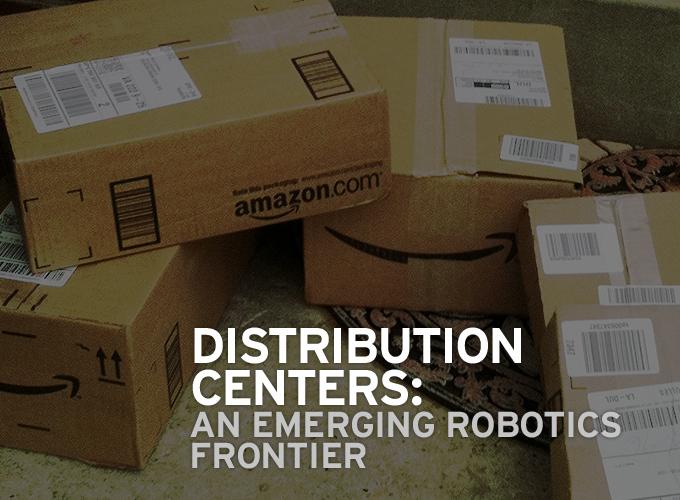 Distribution centers (DCs) are massive warehouses that receive, inspect and store goods for later picking, packing and shipping to end-users, re-distributors or retail outlets. Products can be everything from books, pharmacy goods, clothing, office goods, food, drinks, shoes, produce, household items and pet supplies to diapers. And quantities can be one or two individual units to 20-100+ cases.

Driving the expansion and change in DCs are (1) online sales and consumer expectations of speedy delivery, (2) enhanced data manipulation capabilities, multidimensional processing and integration of new-tech mobile robotics into material handling, (3) proof that goods-to-man methods saves money, reduces labor and increases productivity, and (4) a current need to develop more cost-efficient centers (caused by delays and skittishness to make capital investments during the economic crisis). E-commerce sales are growing at an annual compounded growth rate of 8.5% - double that of supercenters, club and dollar stores. Supermarkets and convenience stores are growing as well. The quantity of materials that are moved daily through DCs is staggering as are the streams of data and algorithm considerations. [Source: Nielsen TDLinx & Nielsen Analytics]

The immensity and complexity of the supply process can be seen in this video showing how a Giant Eagle supermarket is resupplied from its regional distribution center:

Amazon has and continues to lead e-commerce-driven distribution with their pick-to-cart method (otherwise known as man-to-goods) and their promise of speedy economical delivery. Workers run around and fill carts and deliver them to conveyors where they are transported to packing stations where individual shipments are processed and staged for pickup by FedEx, UPS, etc.. The metrics for this are 160 picks per hour. The video below shows that process.

Kiva Systems disrupted those metrics and increased worker productivity by reversing the man-to-goods process. This method brings the goods to the packer (goods-to-man). As Kiva's success became proven in the field, Amazon acquired Kiva for $775 million and is beginning to install Kiva systems in their new warehouses. It is estimated that the new Kiva metric for Amazon consumer goods is 600 items per hour.

These metrics translate into fewer employees and lower warehouse costs, which include not only the structure but the inside storage and material handling equipment as well. Steve Banker, a consultant at ARC Advisory Group, recently wrote in Logistics Viewpoints:

If you conduct a Google search on “Amazon distribution center,” you come across announcements over the past year for DCs in Virginia, New Jersey, and South Carolina. According to these articles, warehouses costing roughly $50-65 million will employ 1,500 to 2,000 workers.

But then I came across an article about a new Indiana DC. This DC is costing $150 million and the company is only promising 1,000 new workers. Could this be one of the new warehouses that will be using Kiva? The employment numbers seem to add up. This DC will employ at least one third fewer workers.

European DCs tend to be smaller than those in the US where massive centers for Wallmart and Amazon often exceed 1 million sq ft. Amazon has said that it will be filling its new 1 million sq ft distribution centers with Kiva robots. According to their financial reports, they are opening 12 new Kiva-equipped centers in 2012 with more planned for 2013. That is a lot of Kiva mobile robots, and this demand will surely keep them busy building and integrating those devices and their related software systems into Amazon's distribution scheme. In fact, Kiva has already laid off most of their sales and marketing staff but has increased their support staff to assist their new owner (and biggest client). As Amazon leads the consumer products industry to same day delivery, Kiva robots help give them that flexibility. [One-day turnaround isn't unique to Amazon; it is often a necessity. Think produce: vegetables, fruits, baked goods. These goods regularly move in and out of DCs within 24 hours.]


Kiva's acquisition by Amazon has created a void in innovative material handling technology just at the time when companies that had put off building or improving their DCs because of the economic crisis are now ready to invest again. Kiva's low cost for warehouse shelving and speed of installation in bare-boned facilities are far cheaper and faster than any other method offered.

However, Kiva-equipped distribution centers aren't the only methods available for handling robotic-assisted fulfillment. There are many new technologies as well as older-style methods now augmented with various robotics to handle the myriad types of warehoused goods. Amazon, Zappos and other consumer sales companies warehouse and ship small-quantity consumer items. Food distribution and intra-company distribution centers process on the case level. One east coast DC for a chain of groceries regularly processes 20 million cases per week. DCs not only focus on getting their goods in and out of the system but also concentrate on maximizing productivity and keeping their labor costs as low as possible.

There are three companies transitioning to offer goods-to-man functionality: Symbotic, Swisslog and Dematic. The latter two have been in the material handling business for quite some time and have introduced many new robotic solutions. Swisslog is publicly-traded (SLOG:SW); the other two are privately held. All three of these vendors emphasize maximizing warehouse density which can be seen by level upon level (multiple vertical rows) of floor to ceiling racks.

Symbotic, previously named CasePick Systems, is a recent spin-off from C&S Wholesale Grocers, the largest grocery supply company in the US. For the past seven years C&S has been the test bed for the development of Symbotic's line of products which include floor to ceiling high-density shelving and racks, storage and retrieval software, hardware systems, palletizer robots and robotic rovers. Now, as a separate company, they are a provider to C&S as well as other companies.
Symbotic focuses on handling skids and cases rather than on open-box or individual items. In an automated case/pallet warehouse, utilizing available storage area, including height as efficiently as possible, is the goal. Symbotic attempts to maximize usable space by providing and/or integrating all of the shelving, conveyors, stackers, robotic systems, robotic rovers and software, often reaching 17 rows high with the number of aisles limited only by the square footage of the warehouse. It's like multi-level chess except on 17 levels!
Guided by extraordinarily complex software, rovers speed along their row to pick or replenish cases of goods. Once a case is grabbed, the rovers take their goods to a Symbotic-invented device which enables the transfer of cases from multiple rovers at all levels of the shelving structure simultaneously, to a device for getting them down to floor level and then to a conveyor/tug system. The material is then moved to a station where Symbotic integrates heavy-duty Fanuc robotic arms in a palletizing process which then stacks the goods for shipment.

Swisslog's new AutoStore rovers race along the top of modular aluminum storage racks which are located just below ceiling level. The rovers reach down to get bins of targeted goods which are vertically stacked on top of each other. Then they race to a lift/crane which drops the goods down and conveys them to pick and pack stations and/or pallets for shipment. Once the bins have been picked, they are returned to the stack in the same manner.

Swisslog, as its name implies, is European and as such, must always be able to handle unique existing space considerations, often having to adapt to some very unique building configurations. Swisslog claims that their methods maximizes both vertical and horizontal space enabling them to process up to 1,000 picks per hour.

Dematic, headquartered in Luxembourg, is an established European style provider and integrator of logistics and material handling solutions. They offer almost every type of storage solution imaginable and provide distribution and handling for B2B and B2C as well as grocery, apparel, food and beverage and general merchandise.

Dematic provides conveyors, tugs, sorters, lifts and a variety of software for warehouse management, order fulfillment, RFID and SAP solutions and transport maximization. They use all of the different picking methods: pick by voice, pick by light, RF picking, etc.
Their most recent product addition is their row Multishuttle, a robotic rover that travels each row in each aisle in the warehouse picking orders and delivering them to a lift which sends them onward to a packing station.

As is the case in most robotics, smart software is critical to its success. Imagine the algorithms involved in resource allocation to determine which product goes in which bin; which order gets assigned to which station; which pod comes to which station; which robot should get which pod. Then compound that with the problems of integrating that solution into a SAP, IBM, Oracle, Manhattan Associates, or Red Prairie fulfillment system. Then add customized delivery optimization solutions (such as sequencing skids in a truck to delivery routes and sequencing the contents of skids to how they are offloaded in the store) to the mix and you have some really complex software packages.

All of the companies mentioned in this article (Amazon, Kiva, Symbotic, C&S, Dematic and Swisslog) blend techniques from AI, controls systems, machine learning, operations research and other software and engineering disciplines into their mobile robotic platform. All are focused on transforming fulfillment to the goods-to-man methodology because of the increased productivity gains and all are pioneering as they go because goods-to-man is new territory, software-wise.

This article originated as a profile of one company as they began to robotically augment distribution centers. But, as I gathered information, the story has morphed into a review of why Kiva Systems' innovative methods - the goods-to-man methodology - is far superior to other older styles of fulfillment. These older style man-to-goods methods are characterized by serious labor costs, heavy turnover, high cost shelving, conveyors, lifts, and transport and other systems to get targeted materials to a picker/packer or palletizing operation. Robotics, if used at all, is used to augment the worker's reach, mobility and lifting. The new-tech companies profiled above (Swisslog, Symbotic and Dematic) have begun to implement goods-to-man systems incorporating old and new style racks and shelving and all seem to be doing the same thing: building multi-layer shelving upon which rovers troll the levels and aisles picking their stuff and shuttling it off to an elevator which sends it via conveyors or otherwise to pick/pack or palletizing stations, all controlled by colossally-complex proprietary software.