Non-programming users will buy and use the product because they can move or modify a picture, very intuitive. We use a graphical system on Forager for doing dry stack wall layout. I have looked at Grasshopper and will be evaluating the immediate use in the M18-Arm line for both class and commercial applications. 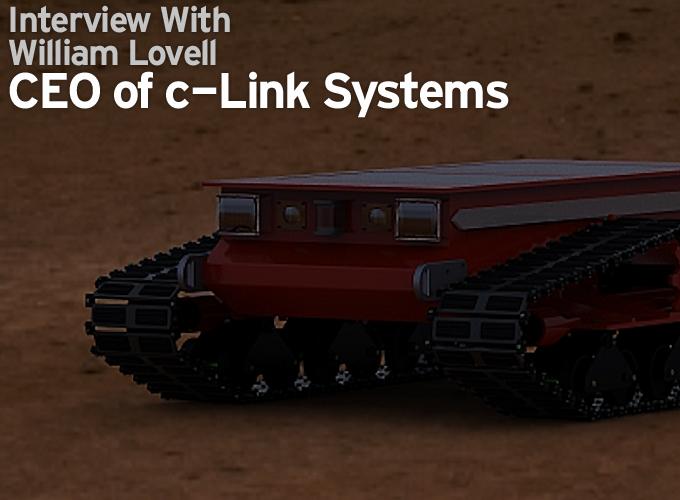 Tell us a little about your company c-Link?

c-Link Systems was founded in February of 2000. I had been working in factory automation upgrades/retrofits with a specialization in fiber optics since the mid 80’s. Hence the lower case “c” in the name is the symbol for the speed of light. By the end of the 2005 we had developed multiple interfaces for GE Fanuc automation equipment and replacement communications cards for GE Drive Systems’ equipment. The whole time I was designing on the side robots to assist within the shop or for construction. In 2005 Hurricane Katrina struck New Orleans, I received multiple emails and telephone calls asking if I had completed a pet project and if not “get it together”. As a company we had been slowly moving out of automation upgrades, it is a cut-throat business where bottom line seemed to be the only concern. From that disaster was born a new direction for c-Link and one I enjoy more. We now have commercial products; Forager-ARV and Vole-Bot, education products; M18e-Arm and K-Arm. 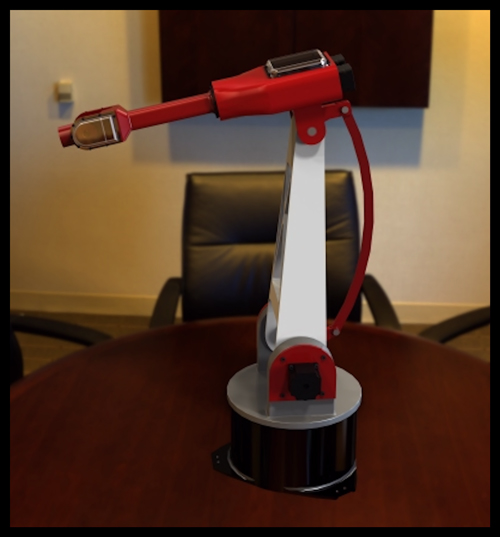 You have several autonomous robotic vehicles. What is the Forager ARV and what are they being used for?

Forager Autonomous Robotic Vehicle (ARV) was the “pet project” from Hurricane Katrina. Forager is what we call an Omni-chassis (Patent Pending), which means payloads (attachments) can be changed or combined without upgrades to the control system. Forager’s electronics not only control the whole chassis but know which payload has been bolted to the deck and cabled. We currently have 2 major models Forager-W and Forager-T; 6-wheel drive and stereo-typical track drive. There is a research model Forager-QT which is a Quad-Track system where the track drives are articulated. The articulation allows for deck height change, more payload stability and it is an all-around research platform. All the Forager versions are IP67 compliant, meaning they are water tight so the unit can get wet or work in the rain. 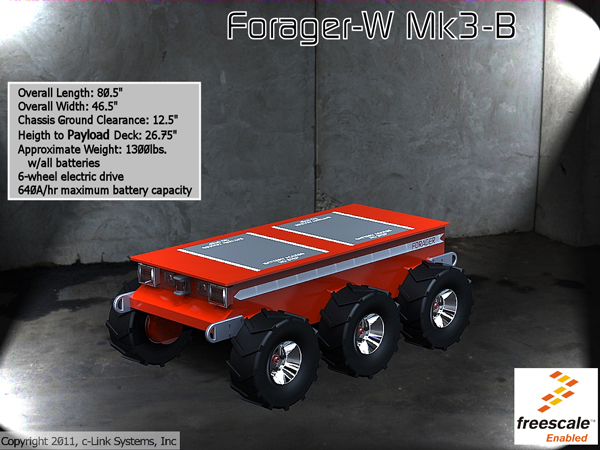 The uses for Forager are actually endless, because they are based on the payload module. The initial payload was designed to assist in opening up a rubble pile after a disaster for rescue and retrieval. We since released a number of payloads for security and commercial/residential construction primarily in construction of retaining walls. In early 2013 we will be releasing a system to fill and place sandbags for flood areas. A secondary unit will remove sandbags and recycle the sand for another day (after it has been washed).

The other autonomous unit is Vole-Bot (VB). VB was designed for only one thing, being dropped down an 8” bore hole into a collapsed mine shaft to search for humans. Because of Vole-Bot’s cost it is deemed an expendable item. 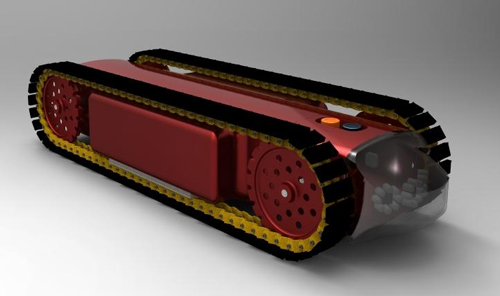 You are using the Freescale Semiconductor’s Tower System and are also producing add-on boards for the stack. Why did you choose that platform?

When I first started decades ago buss structures were either DEC, IBM or military based. Having worked with military based systems the advantage became clear. As time rolled on systems like STD bus, S-100, GESPAC, PC-104 and VME came on the scene. Being an Intel supporter I move to Multibus I but really preferred Multibus II. As with everything buss structures came and went so I moved to doing our own configuration. The problem cropped up that we were not a large enough company to push the structure into the market; customers wanted a more familiar buss. In 2009 we had begun using Freescale Semiconductor processors and attended an online seminar using the Tower System. The seminar was their market introduction. We liked the simplicity of the configuration and the already availability of the processor cards. With a footprint of only 16 square inches on my desktop while I develop code is an extreme plus. The supporting software is well done, at least in my opinion, and it includes real-time OS if required which we do use.  By November 2009 when we arrived in Austin at Freescale there were 5 Tower cards from c-Link for the market. They were: dual 30A PMDC driver, dual 5A PMDC driver, Zig-Bee communications, Inertial Measurement Unit and GPS. We went to CES2010 with these and an additional FPGA card and Inertial Navigation System card. We did these cards and others because they were not available at the time and some are still only from c-Link. We also have an 8-slot and 12-slot elevator set used in Forager only. We will have available in another month dual and quad channel stepper motor cards where each channel is intelligent.

You are getting into the educational space. Tell us a about that.

I spent 6 years of my military career in the classroom, to the shock and awe of my parents. I found that the young people for the most part wanted to learn new things and did have interests in technology. Around 2007 c-Link had introduced a little tracked unit made of ABS with a silicon based track set for inside hobbyist and really all ages. The programming was graphical and at the time we were investing time into using the Microsoft Robotics Studio. We sold about 150 units then interest in robotics slacked off in education so we concentrated more on Forager. In 2010 we began working on a low cost bench top arm for material movement on our mini-mills. A few months ago c-Link also began working on a mobile platform utilizing the Tower System. Conversations with Freescale University program showed a future use for such a platform. In late 2011 I was contacted about putting together a team to compete in the NASA/WPI Sample-Return Challenge. I approached the local technical high school but was told the students didn’t have a very good background in robotics. I was then asked to consider teaching robotics both autonomous ground vehicles and industrial arms. It was at that time, as I began looking at equipment, that I realized costing for most high schools and junior colleges was prohibitive. We looked at taking our bench top arm and with some material changes were able to bring it to a cost that most schools can afford one.  Since the introduction of the M18e-Arm we have developed a smaller simpler unit called the K-Arm. Unlike the M18 which is all aluminum the K-Arm is partially plastic for cost and weight reduction. The control system can still be programmed by student/teacher or just left and used as an industrial arm. Our final portfolio in education will be the K-Arm, M18e and the mobile platform which is large enough to move an M18e around on top.

Have you seen what the guys over at Robots In Architecture / Kuka/prc are doing using 3d design software and parametric visual programming (grasshopper) to design and run physics simulations of the kinematics and then export that to the arm as low level commands. Right now interest for this type of high level robotic programming seems to be coming from the art and experimental fields but do you think visual programming has a future in robotics?

I certainly hope there is a future in graphical input. I took a lot of criticism from my peers a decade ago for thinking like that. Non-programming users will buy and use the product because they can move or modify a picture, very intuitive. We use a graphical system on Forager for doing dry stack wall layout. I have looked at Grasshopper and will be evaluating the immediate use in the M18-Arm line for both class and commercial applications. What they did is similar to MS Robotic Studio and the programming aspect, another area that will get more young people interested in working with robots.

In the next couple of years what would you like to see most out of the robotics industry in general?

Being a seer in some societies can get you into trouble but then if I am not in trouble I would not be having fun. Healthcare is an untapped region that truly needs robotic units using a loose definition. I attended the RoboBusiness2012 and was amazed and elated to see the Europeans taking a stride for home healthcare robots. Many countries like Japan and the US have a large aged populace that is growing even larger. To me if we can put a simple machine in the home that could help them live a more independent life then it should be done.

I would also like to see more automation, tele-operated or autonomous robots in underground mining. Not wanting to put people out of work but thousands of feet underground is no place for a human they are not expendables. The Crandall Canyon mine (Utah) accident in 2007 was my thought turning point and also when Vole-Bot was conceived. VB has since had a couple of processor and battery upgrades.

Those two items will keep the industry busy for a few years I believe.

For the past seven years, c-Link Systems has focused on industrial control/automation of process lines and metal rolling mills. Out of this emerged our expertise in Industrial Robotics and high-speed fiber communications. A prior background in mechanics, dynamics, and satellite guidance systems has positioned the company to support our customers in the growing field of robotics as it related to and autonomous robotic vehicles (ARV) with numerous commercial/industrial applications.

Bill currently holds degrees in electronic engineering, mechanical engineering and industrial engineering.  He has been dealing with fiber optics since the early 1980s and has worked in the development of advanced fiber optic control systems.  Bill was also instrumental in the full fiber optic conversion and systems integration of Alcoa’s #3 rolling mill in Davenport, IA.  This included the development of G.E. FANUC Series 9070 and G.E. Drive System 3800 integration hardware. Bill was also a proponent and developer for Intel’s MultiBus II/MIX bus structures and Freescale Semiconductor Tower System.

He was an instructor for the United States Air Force and a vocational school, teaching both analog and digital circuits; computers that included microprocessors, support circuits, memory, peripheral and video sub-systems and software instruction in Fortran IV/77; Intel assembler and Pascal.  He was instrumental in the development in a hands-on course in robotics for a Massachusetts vocational school and currently for the local technical high school.