Persistence is at the heart of every successful robotics startup, and a lot of pivoting. So the faster you can move from prototyping into customer development, market research and investor meetings, the more likely you are to find a good product/market fit. 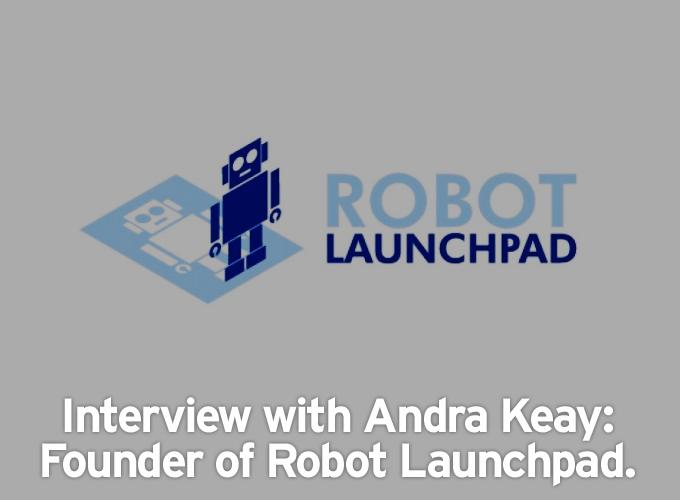 Tell us about Robot Launchpad, how did it get started and what are its main initiatives?

Robot Launchpad has been a fantastic vehicle for testing a lot of assumptions about startups, robotics and the relevance of current software, web and mobile startup methodologies, including lean startup, for robotics startups. Our goal at the outset was to challenge conventional robotics business development pathways and revitalize investor interest in robotics. We've certainly succeeded in being at the focal point for a lot of excitement about robotics and hardware startups generally.

I moved to the US from Australia 2 years ago, with my partner who is running a technology accelerator in Silicon Valley. Although both of us have research backgrounds in robotics, he moved into software and my background is in human robot interaction in the broadest sense, in the transfer points between technology and society. Right now Silicon Valley is the epicenter of rapid change both technological and in the processes of business, a wave of change that Chris Anderson calls 'the new industrial revolution'.

The difference between the very vibrant Silicon Valley/San Francisco culture and what I was seeing of the robotics community as I travelled to conferences was striking. A group of us, including Erin Rapacki (IPI) and Ahmed Siddiqui (ex Startup Weekend) put on a number of events in 2012 which crossed the boundaries. We have a robotic track at Mega Startup Weekend at Microsoft, and at Google IOIO afterhack. We held a robotics mini conference at the blackbox.vc accelerator and generally got a lot of publicity for the possibilities of radicalizing robotics business by using lean startup methodologies, rapid prototyping, early customer development, leveraging COTS and crowdfunding, open source communities etc.

We certainly weren't the only ones thinking along these lines, as evidenced by the rash of highly publicized consumer robot startups like Double Robotics, Sphero, Romotive, Botiful and more generally the amazing ability of some hardware startups to go from zero to 60 with very little investment like Lit Motors, Lark, Pebble etc. When you see an Internet of Things company like Ninja Blocks pitch successfully to Dave McClure of 500 startups - notoriously the most internet facing of investors - you can see people starting to sit up and look seriously at hardware investments. Just recently Y Combinator released a 'welcome letter' to all hardware startups.

But as well as presenting a strong message of support for robotics and hardware to the broader investment community, I think that one of our main initiatives has been  bringing the message back to the robotics community with case studies & examples. I started a robot startup interview series, which appears on Robohub, the global robotics news & views site, where we get to drill a little bit deeper into the successes and failures of some companies who have led the way for smaller startups in the service and consumer space. There's obviously a demand for this because the Automaton blog has just launched a 'startup' focus too.

You are gathering a lot of information on Robot startups.  Can you tell us some of the things you are learning about the processes to a successful robot startup?

Persistence is at the heart of every successful robotics startup, and a lot of pivoting. So the faster you can move from prototyping into customer development, market research and investor meetings, the more likely you are to find a good product/market fit. You need to be very persuasive about your ability to successfully penetrate a small niche, rather than making broad claims. Investors can make that leap themselves, but they are skeptical about any startup's ability to execute without a proven track record.

Assembling a team of advisors and core roles is very helpful for proving your ability to execute. If you can't persuade someone to come on as an advisor, then you really don't have anything yet. I'm talking about a different startup process to that of a person or company who is simply solving a technical problem, patenting it and sitting back. They already have product/market fit.

I'm excited about the whole range of potential robotics and hardware startups out there which involve an imaginative use of technologies that already exist. It's about new business models and that's why it's so important to get out of the door and test your assumptions. It's not necessary to have a working product because you need to make a product that will work for your customers and until you've found your customers, you can't seriously prototype.

Of course, this is even easier if you take an existing robot and repurpose it for a new market. I'm expecting to see a lot of projects like this soon, for example, a telepresence fitness trainer robot, franchising an existing platform.

What are some of the projects that you are working on at the current time?

Robot Launchpad has done a lot of pivoting based on last year's experience. While starting a robotics investment accelerator fund was a particularly appealing direction, it's not really necessary. There are an increasing number of accelerators with a focus or specialty in hardware from Grishin Robotics, Robolution Capital, Lemnos Labs, Haxlr8tr, to PCH International, Seeed Studios, Product Design Group, Robot Shop, to investors like YCombinator, The Foundry Group, even Andreessen Horowitz inspite of their oft stated belief that software is everything.

I've already mentioned the Robot Launchpad series of robot startup interviews but we're also still registering startups and making connections for them. In the process, we're compiling some common threads about issues faced by robotics startups and we're expanding our pool of experts who provide commentary and advice.

Are there some up and coming projects that you can talk about?

My main initiative this year has been founding Robot Garden, a robotics focussed hacker or maker space here in California. It's the logical extension of everything we've been learning. We have high level strategic partners, in the iGate Innovation Hub, Innovation Trivalley and the Livermore Valley Open Campus initiative, who are looking for 'on the ground' presence and through Robot Launchpad we have a community who are already passionate about robotics as the gateway for STEAM (science, technology, engineering, art, math) and lifelong learning across all technology subjects.

It also doesn't hurt that we're located in the Trivalley, an area with the highest PhD per capita ratio in the entire US, both Lawrence Livermore National Laboratory and Sandia are based here and yet it's an area that is 1 hour away from every other hackerspace or Techshop.

Robot Garden is where the maker revolution meets MIT's fablab concept. We believe that hackerspaces or community workshops are the public library of 21st century. The tools, or the books, are just the beginning of a community engagement that leads to incredible invention and entrepreneurship.

Where in its evolution do you think the robotics industry is at this time?

Clearly the robotics industry is seeing unprecedented growth and potential at the moment. The industry in general is expanding from an industry and service professional base towards lower cost personal service and consumer robotics. This rapid growth is going to continue to pick up speed. The mobile phone and internet expansion guarantees that robotics will grow fast, cheap and out of control. The downside is that in many ways robotics is going to just disappear. Everything will use robotics technologies and there is no one industry or application that is a 'robot'.

Where do you see the industry going in the next 5 to 10 years?

The robotics industry as we know it is about to disappear. It's going to become pervasive. In 5 or 10 years time, robotics technology will be in everything. The demand for roboticists, or people with the skills to work across engineering/compsci is going to skyrocket. At the same time, we won't call most robotic devices or appliances 'robots'. They will simply become 'autonomous', 'smart', 'driverless' or 'unmanned'. I believe that one last category of 'robots' will come to 'life' in 5 to 10 years and that is the social household robot. If it can talk to us like it cares, we won't mind if it only picks up socks, or makes coffee and lets the cat out.

Andra Keay is a robot startup evangelist, Founder of Robot Launchpad, Managing Director of Silicon Valley Robotics and CoFounder of Robot Garden, a new robotics hackerspace. She obtained her MA in Human-Robot Culture/Cultural Theory at the University of Sydney, Australia in 2011, building on a background as a robot hobbyist, STEM educator, computer network administrator, software developer, web site designer and film-maker. She graduated as an ABC technical operations trainee in 1986 and obtained a BA in Communication from the University of Technology, Sydney (UTS) Australia, in 1998. Andra has been running science, computing and robotics workshops since 1995, with a focus on empowering people to adapt to changing technology. She is also children’s robotic team coach. Since moving to Silicon Valley in 2011, Andra has founded Robot Launchpad, an early stage accelerator for robot startups, is the inaugural Managing Director for Silicon Valley Robotics, an emerging robotics cluster and has also cofounded Robot Garden, a space for makers and hackers with an interest in robotics.