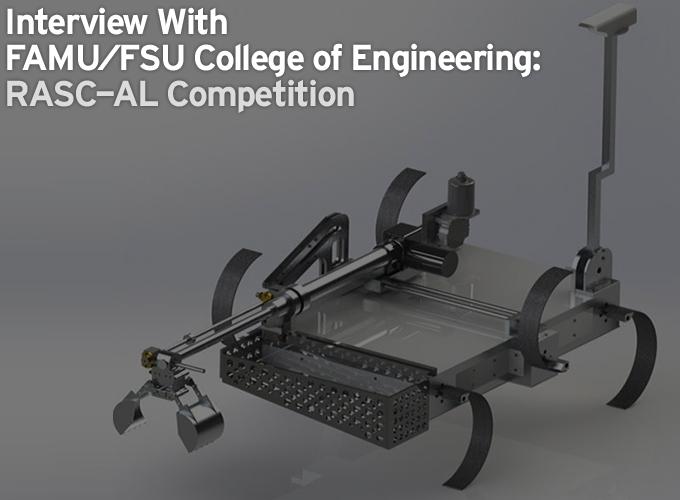 To begin, our team from the FAMU-FSU College of Engineering (COE) is developing a six-legged rover named SPACE-HEX for the 2013 RASC-AL Robo-Ops Competition. We have passed the Mid-Project Review, and are expecting a second monetary installment from NASA. Also, most subsystem hardware has been successfully transferred to SPACE-HEX; our competition-spec. rover. We’ve successfully tested a couple aspects of SPACE-HEX’s locomotion, straight-line walking and rotating in place. We are currently troubleshooting and refining subsystem controls and mission control architecture in preparation for complete system testing of the fully assembled rover.

The rover’s controls configuration underwent the biggest change. A second Raspberry Pi computer was added so that both the sample extraction module and locomotion control systems had dedicated computing hardware. The locomotion drive system has changed from having one motor driver per leg motor to one motor driver per two leg motors with new, more reliable motor drivers. With the introduction of new motor drivers, the pulse width modulated (PWM) signal is no longer produced by the field programmable gate array (FPGA) but produced by the new Sabertooth motor drivers based on commands sent in serialized packets from our computing hardware. Our rock gripper mechanism was redesigned to increase gripping power and overall strength due to concerns with digging. Finally the material comprising the rover’s legs changed from carbon fiber to fiberglass due to revised stiffness requirements and costing constraints.

The original leg motor drivers, from OSMC, proved problematic. The drivers were inherited from the previous, similar senior design project. The motor drivers, while capable of handling the high power demand of the leg motors, were otherwise lacking in crucial areas such as protection from current overload.  This became a major problem during testing when transistors would become irreparably damaged for seemingly no reason. Attempts to add such protection based on documentation from OSMC were of no avail. There were also issues such as components in corresponding positions having different values that further alienated the team. In this case, the team decided to simply obtain new motor drivers. With the introduction of the new motor drivers, the reliability of driving the motors has increased and the team has since made great strides in the locomotion of the rover.

This project for us started in August of last year with the design and initial electronic configurations on sample hardware. Since then the team has put in easily over 2500 hours in the development of this rover. This time includes the design, prototyping, machining and debugging of this new platform. Many of these hours come from having a legged rover which makes the control of the rover far more complex.

The team is currently working towards complete integration of SPACE-HEX’s subsystems. The components to power the entire system (lithium ion batteries and voltage regulators) still must be purchased with the final stipend from the competition and integrated into the system. Wireless communication with the cameras also has yet to be established but should be completed before May. The walking algorithm will also be optimized and made more robust such as adding the ability to turn while walking which will be extremely important during the competition. With all of that done, the team will use May to test the rover in conditions similar to that in the competition to spot bugs and other weaknesses so that they can be corrected before the competition.

The team primarily uses the COE Robotics/Advanced Controls Lab to meet and facilitate the development of our rover, SPACE-HEX. The lab has oscilloscopes, multimeters, tools, and a plethora of circuitry development hardware. The COE advanced machine shop is where all of the rover’s fabricated parts were made. The STRIDe Lab is where our faculty advisor conducts his research on mobile robotics, and the team was allowed to use this facility to develop our rover’s legs. During the prototyping phase of the development of the FPGA circuit, the electrical and computer engineers made use of the Digital Logic Lab that was stocked with Altera DE2 boards. This proved essential in developing the FPGA circuit before there were funds to acquire the team’s current FPGA board.

Set team mission goals so that the team can identify necessary system performance and set a desired margin of capability. Ensure the entire team is familiar with the competition’s structure and regulations. Don’t be afraid to ask the competition stewards clarify anything that isn’t fully understood. Finally, take advantage of NASA reporting and documentation on similar rover systems (historic and current). Most importantly, begin building and testing hardware as soon as possible. Everything works one hundred percent on paper but will almost never work absolutely perfect in implementation. In some cases designs will be required to be changed, sometimes drastically. It can definitely be said that the majority of the team’s time has been spent debugging both hardware and software bugs. We cannot stress enough how important it is to simply start early and put in the time required to build a working system.