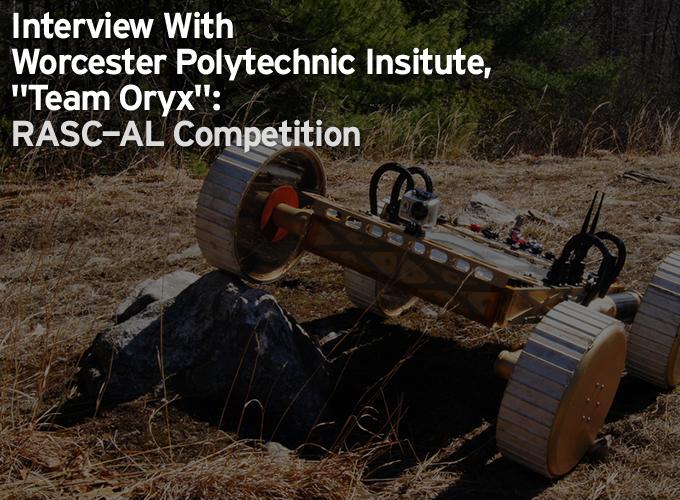 The project is coming along great. The two robots that we will be competing with are both assembled and functioning. We have been running a number of field tests with the micro-rover to evaluate how it would perform under competition settings. On ORYX, we have fabricated a few new components including a redesigned top plate aimed at reducing overall weight. We have also been running both robots together, and building up our competition strategy based on this novel two-rover system.

Since December, our micro-rover has undergone a couple of major design revisions. We originally were going to create expandable wheels for the micro-rover, but found that to achieve the necessary strength they would either be too heavy, or prohibitively expensive to manufacture. So instead we designed a static pair of carbon fiber wheels that fit our needs.

The biggest challenges we have run into is the size and weight constraints. Every time the team comes up with ideas for a new feature or design we have to see if everything will fit the starting configuration, and make sure we don't go overweight. We've also ran into a problem with running low on USB bandwidth. Between ORYX and the micro-rover, we are running four cameras. All the data from the cameras need to pass through OYRX's USB controller. This is approaching the limit that it can handle. We have to be smart with our video compression and resource allocation to avoid problems.

If we average it out, each person has put in at least 15 hours a week since last September. Thats at least 5100 man hours to date.

We have a lot more testing to do. We want to make sure our operators are comfortable with controlling the rovers in a competition setting. We also have some software feature that we are creating to make it easier for the operators to figure out where and what orientation the rovers are in, as well as add in some safety feature to prevent the rovers from from running into problems the operators wouldn't be able to realize from just looking through the cameras.

We are always looking for students who would be interested in participating. Recruitment is an ongoing process with interested students participating when they can. Team members and advisors tell people about it in their classes, and we get a good number of people that way. We emphasize that academics come first. Everyone is responsible for committing to only what they can accomplish with their course work, and they aren't expected to over extend themselves just for Robo-Ops. That being said, the team members are quite committed to the competition, and go out of their way to make time to work on the project.

To work on the robots we have a couple of different shared lab spaces that are stocked with all the tools we need for assembling and developing the robots. For manufacturing our campus has three machine shops that we make use of. We have access to many pieces of equipment for rapid prototyping including CNC machines, a laser cutter and 3D printer.

Starting early is key. We started the design process for the the rovers well in advance of being selected to compete. Going back and looking at the videos from past years also gives a good idea of what works and what doesn't. There's no reason to repeat the mistakes that teams in the past have made.