We build all our robots around a popular open source robotics development framework, called Robot Operating System (ROS). Since it is open source, it makes it quite simple to integrate with other open source initiatives, like Android. 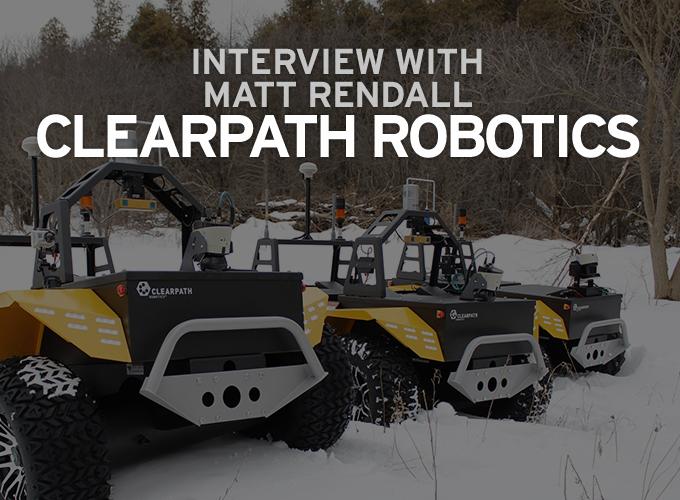 We sat down with Clearpath Robotics CEO and co-founder, Matt Rendall, to learn more about this leading edge robotics company. We got an insight scoop on their newest product, Grizzly Robotic Utility Vehicle (RUV), and learned how the beast is making a stir in the market.

Tell us about Clearpath Robotics, how was it started and what is its Mission?

There are four of us that founded Clearpath Robotics: myself (Matt Rendall), Bryan Webb, Ryan Gariepy, and Pat Martinson. We founded the Company in June 2009, but the project and the vision for the Company began in 2007. While we were attending the University of Waterloo Mechatronics Engineering program, we worked to create robots that cleared landmines in war torn countries. The idea had potential to save lives, but held significant risks. Because of our experience as students, we realized that academia needed reliable, out-of-the-box, affordable robotics research solutions. That's when we decided to pivot our focus from mine clearance to research and development, and shortly after that, we received our first order. By 2009, Clearpath Robotics was officially founded and production began on robust and reliable robotic platforms for military, industrial and academic robotics research.

Our vision is to automate the world's dullest, dirtiest and deadliest jobs, and through this vision, we have become a leader in the unmanned vehicles industry for research and development with clients including the Canadian Space Agency, the Department of National Defence, MIT and Carnegie Mellon University. Some of our most notable products are Grizzly, Husky and Kingfisher. All in all, the robotics industry is a very exciting area to be working in!

What are your core technology focuses?

Our core technology focuses on the building blocks for autonomous vehicles.  We develop hardware and software modules to accelerate the development of new intelligent, autonomous or unmanned vehicles.  By focusing on modules, we can offer our R&D clients a faster time to market, a lower total cost of development and a lower technology risk - all very important factors for R&D departments.

Tell us about the Grizzly RUV.

Grizzly is a Robotic Utility Vehicle (RUV) designed for aggressive mining, agriculture and military field robotic.  Grizzly is our largest robot and is the first of its kind in the industry.  It was developed to perform like a tractor yet it was designed from the ground up to be unmanned.  We are seeing some very interesting applications for Grizzly, most of which fall into the area of agriculture. For instance, a research team wants it in the Canadian North to pull a small plane, vineyards in Italy are looking to use it to assist with monitoring the land and farmers across the globe are interested in using Grizzly to autonomously plow fields. 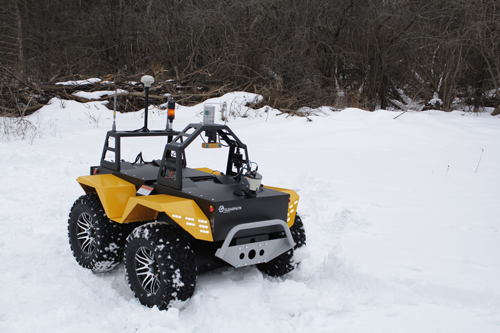 How is the Grizzly breaking new grounds in research?

Grizzly allows researchers to test and prove applications much closer to market.

What applications do you foresee for the Grizzly?

There are three key applications for Grizzly that we are currently trending. The first is mining, and more specifically, mining companies want to use it for mapping applications.  The second is agriculture; customers want to use Grizzly as a harvest transport and for chemical spraying. The third trending application is military; they are interested in Grizzly to provide squad support.

Recently you wrote about being able to control a Grizzly RUV with an Android phone, tell us a bit about that.

We build all our robots around a popular open source robotics development framework, called Robot Operating System (ROS).  Since it it open source, it makes it quite simple to integrate with other open source initiatives, like Android.  Our engineers love hacking together cool projects and most of them use Android phones.  "Wouldn't it be cool to drive Grizzly from your phone?".  So they did it.

What major trends are you seeing in the Robotics industry at this time?

We are seeing more and more industrial applications for field robotics and unmanned systems.  The defence industry has invested billions of dollars over the past decade and in doing so, they have shown to the world that unmanned systems can be trusted in mission critical environments.  We are now seeing early adopters in mining, agriculture, factory automation, automotive, environment, healthcare all begin experimenting with robotics.

Look in your crystal ball for a moment, where do you see Clearpath Robotics 5 years down the road?