Low-cost robots are marching into Small and Medium Enterprises (SMEs)

Rethink Robotics' Baxter and Universal Robots UR5 and UR10 are Succeeding

05/31/13, 03:53 AM | Industrial Robotics | Business Development
Much has been said about the need to augment the skills and increase the productivity of small factory workers by using robotic assistants called co-robots. Europe funded an SME (Small and Medium-sized Enterprise) public-private consortium to determine the needs and develop robotic solutions for those needs. In America, venture and privately-funded Rethink Robotics whose founder and CTO is ex-MIT Professor and co-founder of iRobot Rodney Brooks has been doing the same thing: developing an adaptive manufacturing robot that can work safely alongside human workers. Brooks is devoted to - and an eloquent spokesman for - his mission of creating smarter, more adaptable, low-cost robotic solutions that can help manufacturers improve efficiency, increase productivity and reduce their need for offshoring.
Almost all of the big industrial robot makers have or are working on lightweight and human-friendly arms, but are not offering them at low cost, or with user-friendly training, or the plug and play features. In addition to them, there are other robot startups in the SME marketplace - and on the horizon - but none are as far along in their development and low cost as these two at-present privately-held companies: Rethink Robotics and Universal Robots.

Rethink Robotics' new Baxter robot is getting a software upgrade. Big deal? Actually, it is. When Rethink Robotics launched Baxter late in 2012, it was obvious that Baxter needed some improvements. Rodney Brooks promised those improvements incrementally over the next few months and year. Brooks' vision was to have a hardware platform frequently enhanced with new software and capabilities - and it is happening as promised and on schedule. 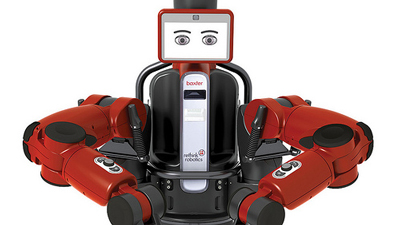 Rethink recently launched an academic version of Baxter with a Software Development Kit (SDK) enabling users to train the robot and share their programs with other Baxter owners. Although the SDK academic version is different than the production model, after a while, the concept of an open SDK and an Apple-like app store will be enabled across Rethink's whole product line.
Just the other day Rethink upgraded their operating system to V1.1 to make it easier to integrate existing factory machine synchronization, I/O and task sequencing and ordering systems into Baxter's repertoire of programs - a very neat and necessary feature. Now Baxter can integrate and connect with up to 9 digital ports to existing automation systems through signaling. This new update also enables users to coordinate actions across Baxter's two arms.
Baxters are being produced at a pace for sales of 500+ units in 2013.

Universal Robots UR5 and UR10 Robots 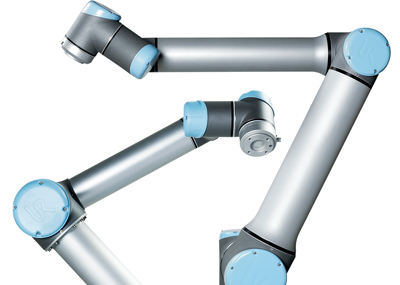 One of those new distributors, Scott Hendrickson, CEO of Olympus Controls, said: "The quality of new leads has been off the charts. Most of our existing clients are Fortune 500 companies, but now we’re able to better service small business owners on Main Street as well,” he says, attributing the growth to the cost and ease of use of the UR robot. “In typical robot solutions, you multiply the robot cost by three or more to get the end price due to safety guarding and expensive programming. None of this is necessary with the new Universal Robots.” Hendrickson went on to say: "We believe these new robots will soon cross the chasm between early adopters and mainstream users."
“A key selling point of our robots is that they are continuously upgraded”, said UR Sales Manager Kristian Hulgard. “Once purchased, our users can expect a steady stream of software upgrades giving them access to all the new features on the latest robots to leave the factory. This makes their investment future-proof.”
UR is building 100+ robots a month of which approximately 25-30% are for customers in the U.S. for 2013.
Both UR and Rethink are finding price acceptability and each have provided case studies of how their robots are being utilized. 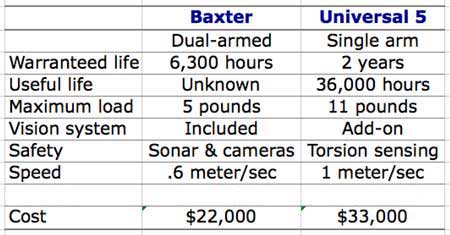 A Couple of Examples of How These Robots Are Being Used 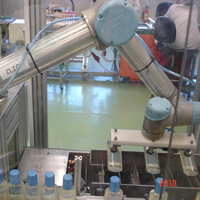 Universal Robot picking and placing multi-sized cream containers in Johnson & Johnson factory in Greece.
The robot takes bottles of cream from one production line, and places them onto the packaging line. Flexibility is the key requirement because there are several different types of creams coming down the line, each positioned differently.
The Greek integrator/distributor, InnoPro Technologies, which sold and installed the robot, said that J&J engineers were 100% satisfied and have even given the robot a name.
A Baxter robot has been deployed at the Rodon Group, a Hatfield, PA injection molder and is among the first plastics processors to deploy a Baxter robot. It is being used for repetitive tasks like picking up parts off a conveyor and placing them into boxes or onto a nearby packaging line.

Baxter picking and boxing plastic parts at Rodon Group factory in Pennsylvania.
The robot is being "trained" by the very people it is assisting. Because Baxter is oblivious to heat or noise, it can take on those “hard to fill” positions in noisy and un-airconditioned industrial circumstances.