Downtime near zero vs. extended downtime of former gantry system. 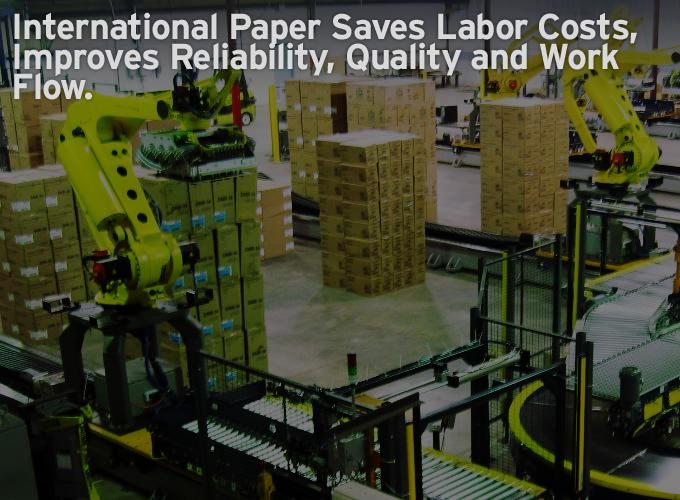 In 2007, International Paper began to research ways to improve the performance, increase the capacity and reduce labor costs of its load unitizing operations at its Kenton, Ohio paper cup and plastic lid production facility.  International Paper planned future production volume growth at the Kenton facility and needed to remove system bottlenecks.  Its unitizing requirements had grown both in SKU’s or unique products and in throughput.  The aging and unreliable overhead gantry system could not keep up with current production and future increases in production and SKU mix.

The existing system was installed in 1996.  It used 2 gantry-style units for automated unitizing of 65 percent of products, and a conveyor loop for manual stacking of the other 35 percent.  Manual stacking required boxes to be lifted as high as 85 inches.  Forklifts transported finished units from the center of the facility to the loading docks.  The units were then fed through a stretch wrapper and loaded onto trailers to be taken to an offsite warehouse.  The existing gantry system was unreliable, outdated with obsolete controls and had high repair costs.  It also generated a high level of forklift traffic through the facility and required some manual stacking of boxes.

According to Jay Drummond, assistant plant manager at International Paper, the old system had several issues –

Loads formed in the operation are relatively light, allowing International Paper to cube out its shipping trailers. Therefore, the new system would be required to form and handle “unitized loads,” or loads without pallets. International Paper preferred that the unitized load not be transferred on roller conveyor until it was stretch wrapped to keep it as tight and uniform as possible.

In summary, International Paper needed to improve current unitizing system reliability, allow for future production and product mix growth, reduce material flow/congestion in the plant, and reduce labor expense.   In addition, the new system would have to be carved out of a very limited area near shipping to create space for other new equipment coming into the plant.

The completed system consists of;

The head end of each of the five robotic unitizing lines is equipped with a case registration station and case accumulation conveyor. Each RTU allows the robot to travel approximately 100 feet along the face of unitizing positions located on both sides of the rail. This significantly increases the working envelope of each robot, allowing the system to form many loads with different SKUs at the same time.

Case registration in front of each robot cell, and robot with cases on traveling conveyor

Sidebar – How the System Works

Case Conveyor to Centralized Unitizing Operation - As cases travel on a line shaft driven roller conveyor to the shipping area where the new centralized unitizing operation is located, the tops of the cases are automatically closed and taped, and a scanner system ensures the tape is properly applied to the top and bottom of each case.

Another bar code scanner identifies the product’s SKU and allows the system to track each case to one of five robotic unitizing lines.  If the case staging conveyor at the head end of the line doesn’t have room for a case when it arrives, the case is routed around a recirculation loop until space becomes available.  High volume cases can be assigned more than one unitizing position in the system and are typically spread across more than one robotic unitizing line to evenly spread activity in the system.

Case Arrival at Unitizing Lines and Robotic Unitizing - Mixed cases can arrive in any order at the head end of each unitizing line.  Up to four cases automatically transfer to a matching conveyor bed that rides with the robot along the rail.  The robot controller directs the robot to deliver individual cases to their final destination(s).  The robot places all like cases onto the corresponding unitized load being formed.  It then moves to the next SKU location until all cases on the robot’s conveyor bed have been delivered.  The robot then returns to the head end of the unitizing line to pick up more cases.  The robots travel up and down the rail transfer units, covering about 3,100 miles a year and handling 710,000 cases each.

Loads are unitized directly on the floor, eliminating the need for costly load stands.  No pallet or slip sheet handling is required for the loads, further streamlining the operation.  Unitizing positions are spread along the five rails to simultaneously allow the system to unitize all SKU’s from production plus sufficient additional stations to allow SKU’s in production to be simultaneously changed over without jamming up the system.  Partial loads for end of run situations are also handled by the unitizing system.

Operator Configuration of the Unitizing Cell - Whenever a new SKU begins to run in production, the control system recognizes it and automatically assigns the next best available unitizing position based on a load balancing algorithm developed specifically for this system.  For new SKU’s not already defined in the system, an operator enters the new product identification code and corresponding load data including case pattern into the unitizing system’s master HMI touch screen.  The operator can also adjust unitizing patterns and create new ones on the HMI screen using simple graphic symbols and text prompts if needed.

Finished Unitized Load Transfer From Unitizing to Stretch Wrapping – A three vehicle, inertial guided Automatic Guided Vehicle System moves loads from the unitized load forming stations to the two automatic stretch wrapping stations.  When a unitized load is complete, the robot controller places a call to the AGV controller.  The AGV controller maintains a queue of all pending move requests and assigns them in a manner that prevents AGV gridlock in the highly confined space where the system operates.

AGV #3 of 3 entering aisle, then lining up at load and extending clamp for load pickup

AGV Operation - Each AGV is equipped with a hydraulically actuated clamp mechanism mounted on a vertical mast and horizontal shuttle carriage.  An AGV enters one of six load pickup aisles in the forward or reverse direction of travel into the aisle where a load is waiting to be picked up, depending on the side of the aisle where the load is located.

Each SKU has its own clamp pressure depending on the weight of the load.  A different pressure may be used by the AGV for partial loads.  The robot control system communicates closely with the AGV control system to let the AGV know what pressure to use on each load.  AGVs handle unitized loads much more predictably and with less product damage than their manually operated counterparts.

According to Drummond, the new system had several benefits:

In addition, International Paper had an unexpected outcome from the new automated system – the automation drove improvements to problems in upstream processes that could impact the new system.  An example of this was the inconsistent upstream case sealing equipment.  It often damaged boxes that had to be repacked or scrapped.  It also didn’t tape the boxes properly and caused product to fall out, or large amounts of boxes to be ejected at a detector.  As a result of the new system, International Paper made equipment, operating, and maintenance changes to improve the overall system performance.

Improved reliability – “Performance of the system has been exceptional since installation.  Downtime for the unitizing operation has been near zero,” said Drummond.  “When customers tour our facility, they are amazed at the newly automated system.  People, including our own employees, enjoy stopping to watch the system work.”

Redundancy features in the new system include; Bluetooth I/O for the end of arm tooling which will result in even greater than normal robot uptime and reliability;  both stretch wrappers are equally accessible by the AGVs, so they are fully redundant.  The same concept applies to each robot – they essentially back each other up.  Likewise, the AGVs back each other up.

The system can handle partial loads, which occur at the end of every product run, very effectively.  Other automated systems won’t handle partial loads down to a single layer as effectively and automatically.  The former system could not handle single layer loads.  Manual clamp trucks squeeze too hard and smash the loads, or not hard enough causing the cases to fall.

Improved quality – The system performs case handling without damage.  In conventional unitizing systems by man-aboard clamp truck, cases routinely get smashed in.  Instead, the AGVs are programmable to apply only the amount of pressure needed for each load type.  AGVs handle the loads consistently, without damage.  In addition, once a unit load is formed, the load is not conveyed again until it is stretch wrapped, allowing the cases to stay packed more closely together.  This leads to more consistent stretch wrapping, better handling and less damage by man-aboard clamp trucks from stretch wrapper to the trucks.

The new process has no manual touches of cases from machine to stretch wrapping, eliminating human error and misrouted loads.  It also lends itself to full automation since AGVs can be used to load trailers from the stretch wrapper output conveyor.

Improved work flow and plant layout – Work flow improved tremendously.  There is very little forklift traffic through center of plant now.  The new system has a tight footprint, a major goal of the new system.  The new system is unique since it uses AGVs to pick loads and move them to stretch wrappers, allowing International Paper to reduce the use of roller conveyors and transfers, which are difficult to maintain and access.  Using AGVs to transfer material simplified the system and eliminated the need for an additional stretch wrapper.  Located adjacent to the loading docks, there is significantly less travel since the old system was located in the middle of the plant resulting in lower labor costs and reduced product damage.

The new system dramatically improved production flexibility since production can be increased or decreased without concerns about scheduling additional drivers or manual stackers.

The system has ample flexibility to adapt to new case dimensions and case unitizing patterns in the future and can handle a wider range of partial loads without manual intervention.  It is also portable enough that if production grows beyond its current capacity, the entire system could be relocated to a larger area of the plant.  For now, International Paper is making the most of precious floor space in the plant.

“Overall, the biggest benefit from our new system is reliability, which was our primary consideration when we were looking for a new system,” said Drummond.  “We are also excited to be using new technologies that have exceeded our original expectations in every respect.

About Motion Controls Robotics Inc.
We are a leading provider of robotic automation solutions in the food & beverage, plastics, building and construction materials, and board & sheet goods industries. Through strong innovation, knowledgeable people and a bold vision, we can help you find the most appropriate solution for your exacting needs, create efficiencies, accelerate timelines, and keep you competitive. Contact Motion Controls Robotics if you are looking to automate your end-of-line packaging, case packing and palletizing application, or material handling and machine tending application. We want to help you put together world class manufacturing or packaging system using FANUC’s industry leading robotics, and the latest in other material handling automation equipment and controls, that will help you to cut costs, improve quality, and improve your bottom line. Our 24/7 Service Dispatch ensures your ability to reach us for support should you ever need it..